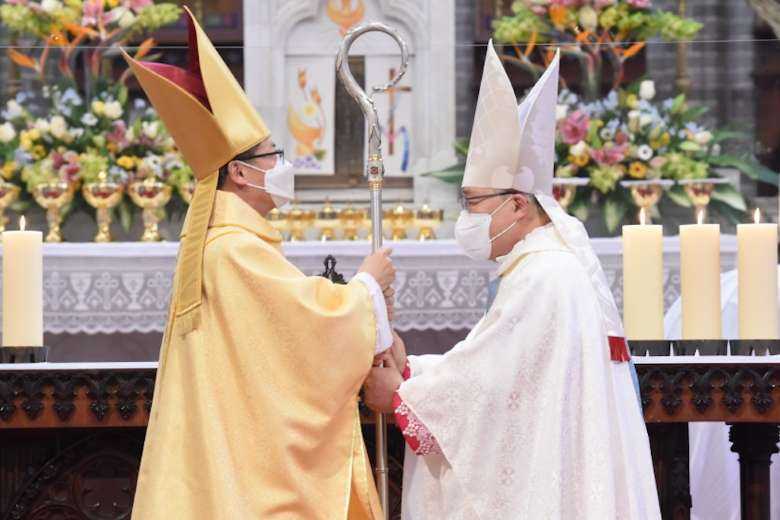 Archbishop Peter Chung Soon-taick took charge as the new head of Seoul Archdiocese while stressing the need to create a synodal church by accompanying every section of the Catholic community in the South Korean capital.

Some 600 people — representing the laity, clergy, monks, nuns and government officials — attended his Dec. 8 installation ceremony at Myeongdong Cathedral on the feast of Mary Immaculate, patroness of the Catholic Church in Korea. “I would like to encourage and accompany all young people while making the Archdiocese of Seoul a synodal church where all the laypeople, priests and the religious take co-responsibility and walk forward together as the People of God,” Archbishop Chung said in his first address as the head of the archdiocese.

Archbishop Chung succeeded 77-year-old Cardinal Andrew Yeom Soo-jung, who retired in October. Archbishop Alfred Xuereb, apostolic nuncio to South Korea, read out the papal letter naming Chung as the new archbishop of Seoul. He then took the oath of obedience saying he would follow God’s will. “God has sent Archbishop Chung as the leader most needed in our time. As the Church is suffering as much as we are in this Covid-19 era, let us follow the lives of all the saints under the leadership of the new archbishop,” Cardinal Yeom said in his congratulatory speech.

Archbishop Xuereb said he was “sure that Archbishop Chung will continue to carry out his episcopal ministry with the attitude of a humble and wise shepherd.”

The nuncio sought prayers for the new archbishop to help him "proclaim the Gospel in its entirety and promote initiatives of unity, peace and reconciliation.”

Bishop Mathias Ri Iong-hoon, the national bishops’ conference president, said Archbishop Chung “will become a leader not only for the archdiocese but also for the entire Catholic community in Korea.”

Archbishop Chung was ordained a priest in 1992 and earned a master's degree in sacred scriptures at the Pontifical Biblical Institute in Rome in 2004.

He was appointed as an auxiliary bishop for Seoul Archdiocese in 2013. He was president of the committee for youth ministry of the Catholic Bishops’ Conference of Korea.

The Vatican appointed him the 14th archbishop of Seoul and the apostolic administrator of Pyongyang on Oct. 28.

The appointment came when the Vatican accepted the resignation of Cardinal Yeom that he offered in 2018.