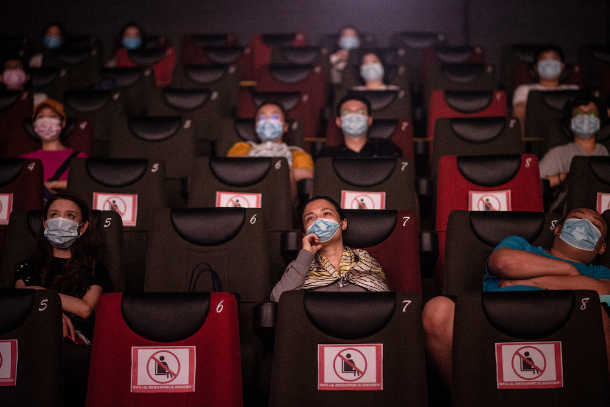 People watch a movie on July 20 on the first day of the reopening of Chinese cinemas in Wuhan in Hubei province. China has issued stricter rules on the content of movies and television dramas. (Photo: AFP)

Communist authorities in China have issued new guidelines to regulate the content of audiovisual programs that some Catholic directors believe will smother programs teaching the Christian faith.

The National Administration of Radio and Television has banned filming 20 categories of content including material promoting fabricated history, sacred relics and demonic possessions. The guidelines look innocuous but will have a crippling effect on the Church's production of audiovisual programs, said a filmmaker working with the Church's film and television industry.

Bible-based content mostly includes miracles and healing. "The guidelines almost entirely ban such content," said the filmmaker, who identified himself as Joseph. "If we film the life of Jesus, avoiding the content banned by the guidelines, we will only be presenting Jesus as an ordinary person, and this is unacceptable to Christians." Father Yo from Shandong said the guidelines also have a positive side by asking "not to ridicule religion and respect the culture of ethnic minorities." In the past Chinese television dramas that featured the Sino-Japanese War and the history of the Chinese Communist Party presented religious groups — particularly Christianity and Tibetan Buddhism — as imaginary enemies and accomplices of the Kuomintang, the national political party in Taiwan. "Such programs deliberately vilified religions and distorted historical facts to make the public fear them and have a strong prejudice against these religions," the priest said. A government move to stop such productions is a positive step, he said. However, the priest was unhappy about the guideline asking "not to film the dark side of society but to film the good life of normal people." "This is strange. How can people have a good life when they don't even have the natural right to freedom of religion? If we do not even have the most basic human rights, how can we be good?" he asked. He also questioned the guideline stipulating that "historical dramas should be based on true history" rather than fabrication. "What is true history? Is it the one fabricated by the Chinese Communist Party? Would it not lead to creating more fake television dramas in line with the party to brainwash the public?" he asked. Wu Daxiong, a Shanghai television producer, said the guidelines were a "fatal blow" to the industry, limiting the scope of their production. He told UCA News that the administration has not officially issued them with the guidelines. Even before this latest move, officials had rejected many scripts and corrected them several times. He said in one case of making a movie based on a novel, "the script was changed more than 20 times, and the story was no longer the same as the original novel. It looked like another story." He said such practices create a huge economic loss to the industry. For example, in this case, the production company had already paid for the novel's rights and an original scriptwriter. "Unfortunately, the new guidelines look even stricter," he said. Liu Ming, a screenwriter working on a historical drama, said he feels even more helpless. "I've broken several of the guidelines all of a sudden, so it seems I have to rewrite it," he said, adding that his scripts involve the history of China from the Xinhai Revolution in 1912 to present times. Liu, who has been a screenwriter for more than 10 years, said the guidelines will "deal a blow to the entire film and television industry." "There are too many restrictions. It means the most basic story outline cannot be constructed. How can we talk about scriptwriting and filming under such restrictions?" he asked. Liu fears the Chinese Communist Party's rush for "ideological management" will destroy artistic freedom and creativity. "They need only political propaganda, not art," he said.