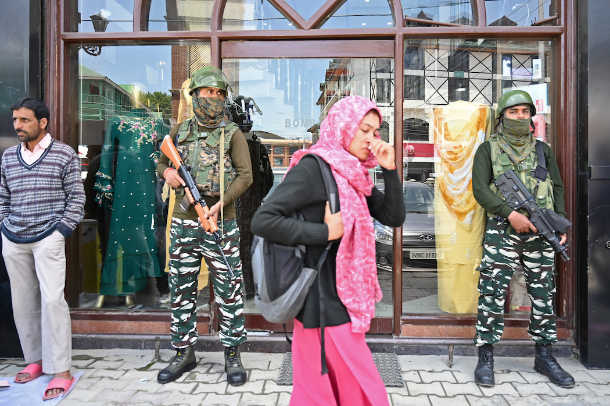 Indian paramilitary troopers stand guard in the center of Srinagar, Jammu and Kashmir on June 13. (Photo by Tauseef Mustafa/AFP)

Church leaders have expressed hope that peace will return to violence-marred Jammu and Kashmir after separatists working to free the Muslim-dominated state offered to engage in peace talks with the Indian government.

After years of stiff resistance, Kashmir’s chief religious cleric and influential separatist leader Mirwaiz Umar Farooq last week made an open offer of dialogue with all sides to resolve the protracted Kashmir dispute.

“We have reiterated that engagement and dialogue among stakeholders are the best and most peaceful means of resolution of the Kashmir issue and not force,” Mirwaiz said in a fresh statement.

Kashmiris have been the most affected by the bloodshed over the past 72 years and they want the issue resolved through dialogue, he said.

The state has become a disputed area ever since British India was divided in 1947 to form India and Pakistan. The neighboring countries both claim it as their own and after three full-fledged wars and several skirmishes, both now administer part of it.

The Indian army’s efforts to crush armed secessionism on the India side of Kashmir, which began three decades ago with the goal of freeing the region or making it part of Pakistan, have claimed at least 100,000 lives. The secessionism and army action continue.

Church people in the region, covered by the Jammu-Srinagar Diocese, welcomed the separatists’ offer of talks.

“Peace won’t come by bullets and bombs but by talks alone,” said Bishop Ivan Pereira of Jammu-Srinagar. “There may be different shades of opinion but what everyone needs is peace in the region.

“Those at the helm need to sit together to save future generations from decades of animosity and bloodshed. Peace comes with the prize and that prize could be some sort of compromise for the greater common good.”

Diocesan spokesperson Father Saiju Chacko told ucanews.com that the Church “is optimistic that all stakeholders are coming to the table and they take a holistic approach with an open mind for a positive outcome.”

He sensed a “lack of sincerity” in resolving the issue. “There is no way other than dialogue to resolve [the problem of] Kashmir. The government has to understand this,” Dais told ucanews.com.

Prime Minister Narendra Modi and his Hindu nationalist Bhartiya Janata Party (BJP) is accused of using Kashmiri violence as a major poll plank during the general elections held in May this year.

BJP critics accuse the Modi administration of creating a war hysteria in Kashmir ahead of the election to project the pro-Hindu party as being the one that was bold enough to challenge Islamist terror and Pakistani threats.

Pakistan-based militant outfit Jaish-e-Mohammad (Army of Prophet) claimed responsibility for a suicide bomber attacking a convoy of Indian army vehicles and killing 40 security personnel in Kashimir’s Pulwama district on Feb. 14 this year. A 19-year-old Kashmiri boy was identified as the attacker.

The Indian government responded by carrying out an air strike on Pakistan, in which it claimed to have killed 300 Islamist militants. Pakistan responded by conducting its own air strike in the disputed region.

Jammu and Kashmir’s former chief minister Mehbooba Mufti said Modi, who won the April-May election in a landslide, had received “a massive mandate” to resolve the Kashmir issue.

“There is only one way to resolve Kashmir, which is through political means and through dialogue,” she said. “Unfortunately, the terrorist incidents in the past only acted as a spoilsport in any proposed process of reconciliation.”

The Indian-administered part of Kashmir has experienced increased violence since 1989, when militants stepped up armed resistance.

Rights groups estimate that 100,000 people have since been killed, although Indian official records put the number at closer to 47,000.