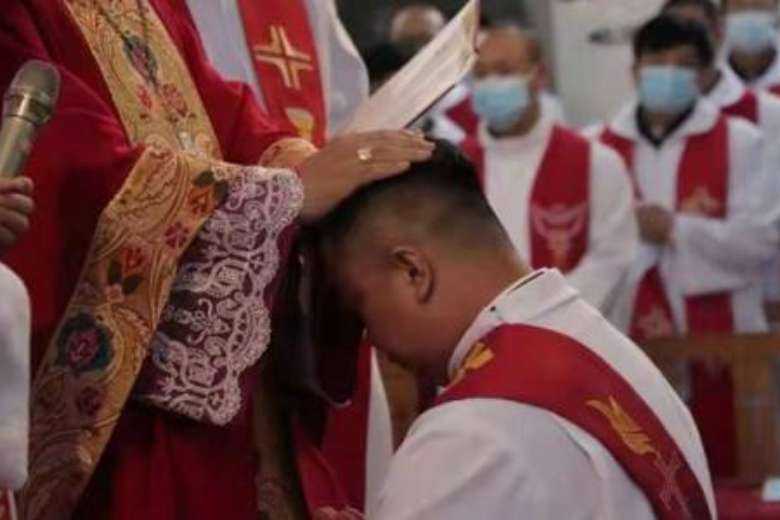 A Catholic priest is ordained in China. (Photo: Fides.org)

The Catholic Church in China has welcomed several new priests in recent weeks in a sign of new hope for the community in the communist country.

Due to the Covid-19 pandemic, ordination ceremonies were held with restrictions in the presence of a limited number of faithful, but the events had no lack of celebrations or enthusiasm.

Bishop Paul Pei Junmin  of the Archdiocese of Shenyang ordained Paul Li Hongdong as a priest at the Sacred Heart of Jesus Cathedral Church in Shenyang, the capital city of Liaoning, the northernmost coastal province of China. The ordination took place on the feast of Saints Simon and Jude on Oct. 28.

The prelate encouraged Father Li to "come down from the altar to set out on the journey towards the mission, towards the people of God, to proclaim the Gospel."

Bishop Pei shared his life story and priestly journey under difficult circumstances with the faithful and urged the new priest "not to be afraid to choose and follow Jesus.”

At the end of the ordination ceremony, he requested the newly ordained priest to bless him and all the priests present.

Bishop Joseph Shen Bin of Haimen Diocese in east-central China ordained Joseph Liu Xingfeng as a new priest on the feast of St. Teresa of the Child Jesus, the patroness of the missions, on Oct. 1.

Bishop Shen congratulated Father Liu on his ordination as he comes from a devout Catholic family and followed two other siblings who entered religious life. His parents have four children.

Father Liu requested the faithful to pray for him so that he could become a “worthy priest.”

In Yunnan, the Catholic community welcomed two new priests from the Jingpo ethnic group, a subset of the Kachin people found in Myanmar, western China and northeast India.

The earliest documented presence of Christianity in China is seen in Nestorian missioners who came to the then Chinese capital of Chang’an (Xi’an). They were welcomed by the emperor of the Tang dynasty in 635 AD.

The first Catholic mission to China was led by Franciscan friar Giovanni da Montecorvino, who arrived in present-day Beijing in 1293. The Russian Orthodoxy was introduced in 1715 and the Protestants started their mission in China in 1807.

For years, the Vatican and the Chinese Communist Party were at loggerheads over bishop appointments

A nationwide survey conducted by the Chinese Academy of Social Sciences in 2010 showed that there are at least 23 million Protestants across the country, accounting for 1.8 percent of the 1.3 billion people in China.

For years, the Vatican and the Chinese Communist Party were at loggerheads over bishop appointments as the Chinese regime refused to acknowledge the authority of the pope. The Vatican and China don’t have formal diplomatic relations.

In 2018, the Vatican signed a provisional agreement with China, initially for two years, to end discord over bishop appointments. The deal, which was not made public, was renewed for another two years in 2020.