Much to the chagrin of Beijing, the elections also saw young pro-democracy activists winning seats — including LegCo's youngest ever member — as the special administrative district saw the highest turnout ever at 58 percent in the face or intensifying interference in Hong Kong affairs from China's ruling Communist Party.

The public has responded by voting not just for traditional "pan-democrats" but so-called "localists" who advocate independence for Hong Kong as well as three members who advocate self-determination for Hong Kong's future, such as environmentalist Eddie Chu Hoi-dick.

The selection of the 70 member LegCo is complex: 35 members are directly elected through geographical constituencies that operate like regular electorates, five are directly elected through district councils and the other 30 are "functional" constituencies chosen by a combination of professional groups and registered individuals related to an established list of professions and industries.

The next candidate — Michael Tien from the pro-Beijing New People's Party — received about 70,000 votes.

The result came as a surprise even to the 38-year-old Chu. A month ago, his support rate in a public poll was just 1 percent.

As a veteran activist, Chu has challenged collusion between government officials and business interests over land development in the rural New Territories district. A somewhat dangerous vocation, that has earned the former journalist death threats in the past. 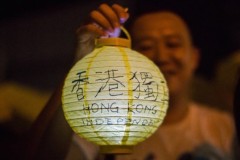 "Chu has a good image that makes him look fresh among other politicians with no party affiliation, and away from tiresome arguments of political parties," Lui said.

Paul Ng, chair of the Catholic Justice and Peace Commission, believed "voters want to see new faces" and were willing to give them a try after seeing the ineffectiveness of pro-democrat lawmakers' using filibusters without long term strategies.

Land and housing has always been a crucial issue in Hong Kong because of its scarcity. Chu's fighting against land hegemony is an attraction to voters, Ng added.

Nathan Law, 23, president of Demosisto, which advocates independence for Hong Kong as an option, has become the youngest lawmaker in LegCo history.

Ng said this election result shows that some voters support ideas over experience.

"In the next four years, it is very important that these young faces put their advocacy into action," Ng said.

Lui said that what has occurred is not about the opposition passing on "batons to the young ones."

"It was the result of Beijing forcing young people to come out as they felt it was useless communicating with the government," Lui said.

"They may not be able to resist the pro-Beijing camp but they can at least slow down the process of Beijing's penetration into Hong Kong," he said.

In addition to this, there were other candidates in the lead up to the election who claimed they had no party affiliation but were later revealed having connections with Beijing.

More than 2.2 million people cast their votes to choose from 213 candidates. The election saw both a record number of voters and a record voting rate of 58 percent since Hong Kong was returned by the British to China in 1997.

Most of the results of the geographical constituencies' votes have been announced by the morning of Sept. 5 with the opposition camp winning 19 out of 35 seats.

The pro-Beijing camp, as expected, obtained more seats in the election but the opposition camp won an overall 30 seats, including 11 seats in the other categories, keeping its minimum veto power over controversial bills and motions.

Watch this uncanews.com video for some footage from Sept. 4's elections.