New apostolic nuncio to the Philippines, Archbishop Charles Brown, prays in the Mother of Good Counsel Parish Church in Paranaque City after arriving in the country on Nov. 29. (Photo supplied)

The new apostolic nuncio to the Philippines has arrived in Manila to take up his duties as the Vatican’s envoy to the Southeast Asian country.

American Archbishop Charles Brown arrived in the country on a flight from New York City on Nov. 29.

Pope Francis named Archbishop Brown his representative to the Philippines on Sept. 28 to replace Archbishop Gabriele Caccia, who is now apostolic nuncio and permanent observer of the Holy See to the United Nations.

Archbishop Brown was welcomed by the Philippine bishops’ conference vice-president, Bishop Pablo Virgilio David, and Bishop Jesse Mercado of Paranaque  together with staff from the apostolic nunciature in Manila.

Instead of going straight to his residence, the new nuncio proceeded to the Mother of Good Counsel Parish Church in Paranaque City to pray to an image of the Virgin Mary.

“[The first thing] I wanted to do was to visit the Our Lady of Good Counsel because I was once nuncio in the country of Albania, the place where this image originally came from,” Archbishop Brown said at the church.

“I hope to celebrate Mass here once Covid is over,” he added before blessing the people.

As papal nuncio, Archbishop Brown will represent the world’s smallest state to the Philippine government as dean of the diplomatic corps.

He is also expected to play a crucial role in appointing bishops and addressing problems within the Philippine Church that could include sexual abuse cases.

Churchgoers were elated to see the new papal nuncio praying in their parish. 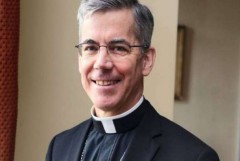 “Straight from the airport, he made our church his first visit to express his great love for and to entrust his ministry to our patroness,” said parishioner Raf Dolor on social media.

“I had to tell him that Father Anscar already passed in 2013. It struck me that Archbishop Brown knew many details of the Philippine Church’s history,” Dolor added.