Newly installed Bishop Jose Ramirez Rapadas of Iligan says he will work for peace, the environment and young people The Philippines’ newest bishop was installed in Iligan Diocese in the southern region of Mindanao on Sept. 5, vowing to be "a servant who is willing to listen."

Bishop Jose Ramirez Rapadas, who at 47 is the country's youngest prelate, arrived in his diocese escorted by police and soldiers.In his message to Catholics upon his installation, Bishop Rapadas said a church that stops to listen "loses her youth and turns into a museum."
Donate to UCA News with a small contribution of your choice
He said listening is a "significant aspect" of his life. "The Lord has planned that I may able to have that gift," he added.The new prelate stressed the importance of listening to young people, especially in their "search for meaning.""Christ is alive and He wants the young to be alive," said Bishop Rapadas. "I hope to use the resources of the Church to help find that meaning, [the youth's] role, and their mission in the communities," he said.The bishop vowed to also listen to the "groaning of creation" because "it's no longer a climate change [issue] but a climate crisis."He said he would also listen to the call for peace because "there is so much violence around the world" especially in Mindanao."It is essential that our community today is active in the process of dialogue, interfaith, inter-religious dialogue, so that we can maintain faith," he said.
Related News 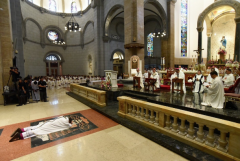 An altar boy and a priest on leave become bishops Some priests just don't want to be bishops

Thank you. You are now signed up to Daily newsletter
He said peace, respect for the sanctity of life, respect for human rights and dialogue are "much superior than war."Bishop Rapasad said he would to listen to the "actual situation" of the people in his diocese, especially the poor.He said that while many are jobless, landless and have no access to education, there are also many who are "so abundant in wealth."

Jeemar Vera Cruz, vice mayor of the city of Iligan and a Catholic priest on leave, said the new bishop is "young but full of wisdom" and a "very intelligent guy."

"We will try our best to build a strong city just as our church will try build a strong Church," he said.After his appointment early this year, Bishop Rapadas became the youngest member of the College of Bishops in the Philippines.He now heads Iligan Diocese, which has about a million Catholics in 26 parishes. Iligan has had no bishop since December 2017 when Bishop Elenito Galido died.Before he was named bishop, he was the vicar general of Ipil Diocese, also in Mindanao.Bishop Rapadas was ordained a priest in 1999 after finishing his studies at St. John Vianney Theological Seminary in Cagayan de Oro City.He had his licentiate in dogmatic theology from the Loyola School of Theology at Ateneo de Manila University.As a priest, he served as seminary professor and rector, director of catechesis, parish vicar and coordinator of the diocesan social pastoral ministry.