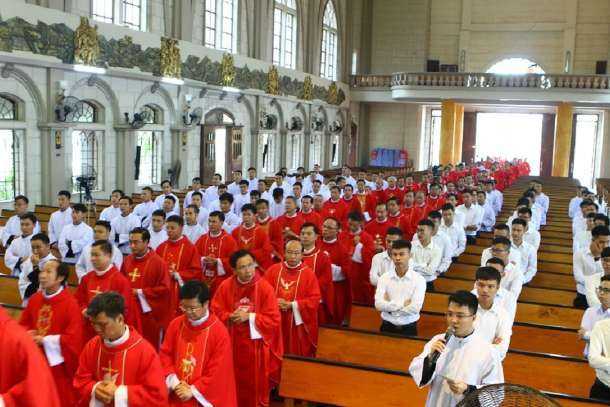 A diocese in northern Vietnam hopes to train more future priests to serve local religious needs after the government approved the establishment of a new seminary.

The ministry asked the seminary to operate, recruit and give students priestly formation according to religious regulations.

Father Thomas Doan Xuan Thoa, head of the diocese’s advisory board, said the seminary’s formal establishment means that the seminary has full legal status and is completely independent from other major seminaries throughout the country.

Father Thoa, pastor of Trung Dong Parish, said the seminary will admit and provide students with priestly formation not only from the local diocese but from other dioceses and congregations.

The head of Nam Tien Hai Deanery said the seminary will meet the increasing demand for priestly formation in the diocese, which annually has 40 seminary candidates but only six of them are allowed to enter St. Joseph Major Seminary in Hanoi. A few others are sent to other seminaries while the rest have no opportunities to follow their priestly vocation.

The seminary’s new facilities, which are under construction, will be able to accommodate 200-300 students.

The 75-year-old priest said Bishop Peter Nguyen Van De of Thai Binh patiently had discussions with the authorities to get their approval.

Father Thoa, who studied at Sacred Heart, said the minor seminary was closed in 1970-71 due to the war.

The late Bishop Dominic Dinh Duc Tru launched a five-year course in philosophy and theology for local seminarians and quietly ordained them.

Consequently, the government shut down the school for 32 years until 2008, when the late Bishop Francis Xavier Nguyen Van Sang obtained a government permit to hold a five-year refresher course for former seminarians.

Bishop Peter Nguyen Van De offered another course to 25 students and ordained them deacons. They will be ordained priests for the diocese in December.

On Sept. 7, over 100 students attended a special Mass opening the new academic year at the Bishop’s House where they will study philosophy and theology while the diocese builds the new facilities. They are from four northern dioceses and some orders which badly need priests to provide pastoral care for Catholic communities.

The Catholic Church in Vietnam now runs 11 major seminaries with 2,824 students from 27 dioceses.