Proposed media law could take independence away from press 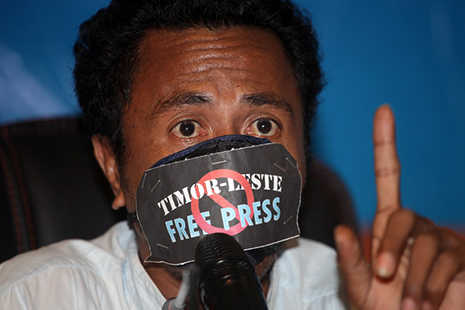 October 2013. Inside a gaudy conference hall at the Timor-Leste Ministry of Foreign Affairs, hundreds of Timorese journalists sit silently, pens and recorders poised, clinging to every word that spills out of the booming-voiced man who stands before them.

During the course of his address, Gusmão tells the audience that he wants Timor-Leste to have a strong, responsible media. But then, with a trademark smile, he abruptly rounds off his speech by admitting that he neither reads, listens to, nor watches media in Timor-Leste.

Moments later he is gone. A door is left swinging as his minders follow him out.

The very presence of the prime minister at this event suggested to many that the government was taking a positive interest in the country’s media. But a very different reality has come to light in recent months.

On May 6, seven years after the country’s first media law was drafted, parliament overwhelmingly approved a version of the bill that some say violates constitutional rights to free speech and a free press. The bill was approved with 53 votes in favor, while just four parliamentarians abstained from voting. Now, if it gets the go-ahead from President Taur Matan Ruak, Timor-Leste could end up with a law that significantly limits media freedom and dictates who can and cannot work as a journalist.

Journalists will be required to obtain authorization from a predominantly government controlled press council before they can work. Clauses that protect state figures would also allow them to conceal information from journalists under the guise of national security, say media practitioners who have studied the law.

Mouzinho Lopes de Araujo, one of several media representatives who were supposed to be involved in the drafting process, said that the lack of transparency and the heavy handed auhtority the government would be granted under the law should be raising more concern.

Despite what was purported to be an inclusive drafting process, 28 of the 54 articles included in the bill had never been seen by the public, said Araujo

Simply obtaining a copy of the law in a language understood by majority Timorese has been farcically difficult, he said. The bill is only available in Portuguese, and though Portuguese is one of the national languages, few Timorese are fluent in it.

“What we have now is dangerous,” said Araujo.

The Timor-Leste Council of Ministers claims that the intent of the bill is to balance media freedom with more responsibility: “Its purpose is primarily to regulate the activity of professionals [to make sure they are] adequately prepared and ethically responsible, so that they can inform the public objectively and impartially and encourage active and enlightened citizenship by the population, thus contributing to a democratic society.”

However, David Robbie of the Pacific Media Centre said the law was “tantamount to censorship” given the level of authority it allowed the government.

Timor-Leste Press Union President José Belo, who was tortured by the Indonesian military before Timor-Leste achieved independence, said he was prepared go to jail to oppose the new law.

"The law will be the death of [Timorese] journalists," he said.

Concern has also been raised regarding the law’s apparent exclusion of non-Timorese citizens from practicing journalism within the country.

Sarah Harmelink, an Australian media lawyer and former consultant at the International Centre for Journalism in Timor-Leste, said the law had “the potential to shut down any external reporting and investigation of Timor-Leste”.

“This proposed law is reminiscent of policies implemented by dictatorships everywhere to hide the reality in their countries from the world, strangling people’s freedom of expression to preserve their power,” said the independent local watchdog La’o Hamutuk.

Recent developments in media censorship suggest that “the government fails to see conflicts of interest resulting from suppressing information that concerns itself”, said Gabi.

With a prevailing culture of deference and respect for hierarchy, Timor-Leste already has a long way to go in terms of achieving a fully free and impartial media. Reporters Without Borders’ 2013 World Press Freedom Index ranked Timor-Leste 77th out of 180 countries.

In the same year, a Freedom House study concluded that “most” news reported in the tiny half-island nation featured verbatim accounts recorded during organized press conferences and that payments of US$5-$25 as a reward for reporters to cover government events were commonplace.

Freedom House also cautioned that while most public officials paid lip service to the notion of freedom of the press, not all were comfortable with it in practice. Indeed, stories that question government competencies are glaringly absent from the bulk of the nation’s media outlets.Likewise, the vast majority of journalists are reluctant to speak of government intimidation.

In March 2012, the national police commissioner, Longinhos Monteiro, stated that police would arrest journalists who published news stories considered to be inaccurate. Seven months later, the Dili public prosecutor placed two reporters under house arrest on criminal charges for an article that was seen as critical of the judicial process following a fatal traffic accident.

As the potential impacts of this new media law begin to weigh heavily on the nation’s journalists and members of civil society, opposition has continued to build on the ground.

Petitions signed by local and international free speech pundits have been hand delivered to President Ruak, urging him to exercise his powers to veto the law.

While whispers from insiders suggest the President may eventually decide to support the free press platform, onlookers continue to wait nervously as Ruak, known to be under considerable pressure, continues to sit on the law.