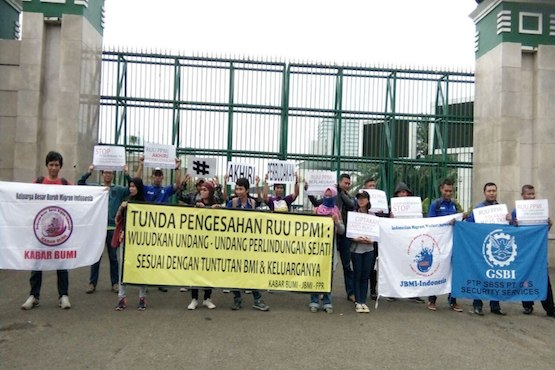 Domestic workers protest outside the parliament building in Jakarta on Oct. 25. (Photo by Iweng Karsiwen)

The new law, a revision of 2004 legislation on the placement and protection of migrant workers, sees regional governments in charge of providing pre-departure vocational training and ensuring workers get proper work placement. The changes are intended to curb the activities of private recruitment firms that charge workers huge fees that tie workers to them as they work off their debt.

"This regulation can guarantee the protection of and better service for migrant workers," Manpower Minister Hanif Dhakiri said after the vote.

However, Iweng Karsiwen, coordinator of the Association of Indonesian Domestic Workers Overseas, called the legislation flawed and discriminatory.

She referred to Article 63(1), which stipulates that a migrant worker should only work for a company, which is a legal entity.

"The article is flawed. Domestic workers work for families, which are not legal entities. It means that both the government and parliament do not recognize overseas domestic workers as migrant labor," she said.

As such it fails to adequately address important concerns such as human trafficking and abuses committed by employers, she said.

According to the Manpower Ministry, there are about 2.7 million Indonesian migrant workers, mostly women working in 10 countries. Most are employed as domestic workers in Saudi Arabia and Malaysia.

Activists say the actual number could be much higher, particularly when factoring in undocumented migrant workers. "The government has far to go to completely protect migrant workers. Many are still at risk from, human trafficking," he said.