After promising to seriously investigate human rights abuses, the government must walk the talk 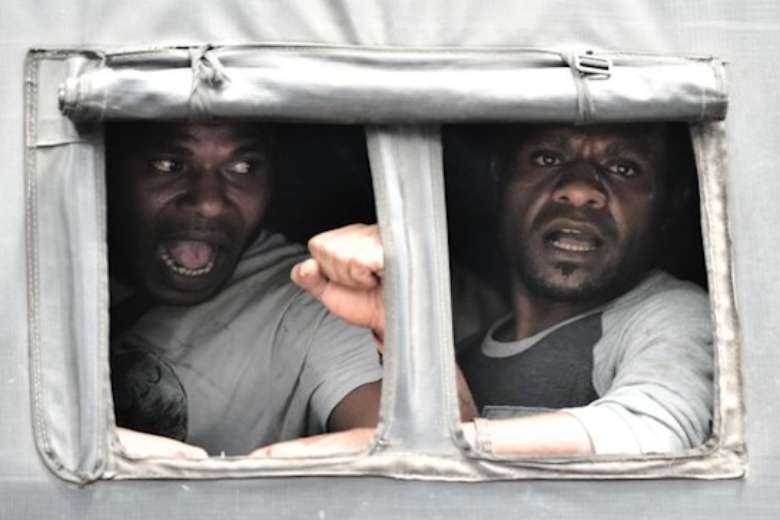 Two men shout as they sit inside a police truck after being arrested during a protest by mostly university students from the Free Papua Organization and the Papua Student Alliance in Jakarta on Dec. 1, 2016. Papuan activists have accused Indonesian President Joko Widodo of not doing enough to honor a pledge to resolve a case in which four students were shot dead by soldiers in Paniai district in 2014. (Photo AFP)

The decision of the Indonesian government to settle serious human rights violations has raised new hope after years of stalemate.

Attorney General Sanitiar Burhanuddin announced last month his determination to accelerate the investigation of serious crimes and bring to justice those behind them.

The ruling comes as a result of incessant pressure by the Indonesian Human Rights Commission (Komnas HAM), activists, victims and the public who demand punishment for past abuses.

For a long time, the government has been accused of deliberately holding up the legal process in cases that have claimed many lives. Its failure to comply with the 2000 law on a human rights court has forged public distrust of law enforcement.

The law, which was passed not long after Suharto was toppled, mandates the general court to settle serious human rights cases. It enables the government to reopen crimes committed during Suharto’s 30-year regime and to prevent similar abuses from happening in the future.

Despite the law’s existence, rights abuses continue to happen due to the government’s mediocrity. Activists and victims of past crimes even slammed President Joko Widodo for appointing some military officials allegedly involved in those cases to assume top posts in the cabinet. These included Defence Minister Prabowo Subianto, who was allegedly involved in the 1998 kidnapping of activists, and Wiranto, the former coordinating minister for political, legal and security affairs.

The public doubts the government’s seriousness in solving such big crimes because it even fails to solve some smaller cases.

The government’s decision to give an honorary award to Eurico Guterres, a former pro-Indonesian militia leader in East Timor's fight for independence, has also caused public dissatisfaction.

Nevertheless, after years of investigations, the human rights commission has finally determined 13 cases that fall under the severe crimes category, including the killing of students during anti-Suharto protests in Jakarta along with the killing of Acehnese and Papuan Christians.

At least 16 civilians were killed when the military raided Jambo Keupok village in Aceh on May 17, 2003, as they looked for Free Aceh Movement militias. Voices against the incident softened when the Helsinki peace accord was signed in 2005 between the militias and the Indonesian government. However, the commission urges the government to settle it.

The Commission for Missing Persons and Victims of Violence (KontraS) recorded more than 1,300 cases of violence against Acehnese people — killing, torture, forced disappearance and sexual violence — during the military operation in a region which now fully applies Islamic Sharia law.

Other incidents on the list of heinous crimes are the killing of Papuans in Wasior, Wamena, and Paniai districts.

The Wasior incident occurred on June 13, 2001, when security forces killed four civilians and tortured 39 others — one was sexually abused — when they retaliated against the killing of five mobile brigade police officers who were hired by a timber company.

The Wamena incident occurred on April 4, 2003 — Good Friday — when the military attacked villages in retaliation for the death of two soldiers who were killed by unknown persons. Nine civilians were killed and hundreds fled. More deaths were reported while they were in refugee camps.

The public doubts the government’s seriousness in solving such big crimes because it even fails to solve some smaller cases.

However, Mahfud MD, the coordinating minister for politics, law and security affairs, assures the public that the government is not playing around. As proof,  the government will start with the killing of four Papuan youths aged 16-18 in Enarotali, the capital of Paniai district, in December 2014.

The incident began on Dec. 7, the second Advent Sunday, when a group of young people warned a soldier to turn on the lights of his car. The soldier did not accept the advice and severely beat the students. The news quickly spread to nearby villages and the next day people flooded the district capital to demand an explanation.

The protesters gathered at Karel Gobai Square, near the police and military headquarters. The protest started to heat up as they pelted stones at military and police officers for not listening to them. The officers then opened fire at the crowd, killing four and injuring more than 20.

The reason the killing of Paniai youths became a priority was that it was the first severe crime under Widodo’s leadership. He instructed ministries and agencies to settle it while he is in office. He wants to keep the promise he made to settle the case when he attended a Christmas meeting in Jayapura several days after the incident.

Widodo has been unhappy when rights groups have accused him of doing nothing to solve past crimes despite the chances and instruments his administration has at its disposal.

When Indonesia marked two years of Widodo's leadership with Vice President Ma'ruf Amin in October, rights groups again criticized him for lack of commitment to improve the situation. They said massive attacks on rights defenders, inaction over rights violations and a continued repressive approach in Papua are evidence of democracy’s deterioration during his second term.

The government has singled out the killing of Papuans in Paniai district as the first case to solve. It has to walk the talk to prove that it’s not an empty promise.

The recent appointment as military chief of General Andika Perkasa, who favors a humanistic rather than militaristic approach in handling conflicts, could be advantageous for efforts to interrogate military personnel allegedly involved in those violations.

His support for Widodo’s initiatives can be a good opportunity to speed up investigations within a military that has been known for its impunity.