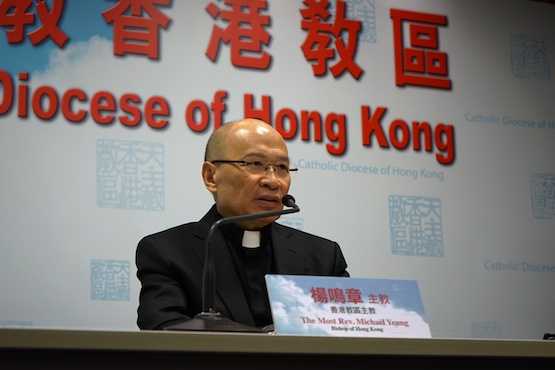 Bishop Michael Yeung of Hong Kong meets the press on Aug. 2. Bishop Yeung has upset some over his remarks on cross removals and the underground Catholic Church in China. (ucanews.com photo)

Christians in mainland China were enraged by remarks on the cross-removal campaign that the new bishop of Hong Kong made in a press conference, just as news broke that a dozen church crosses had been removed or received notification for removal in central Jiangxi province recently.

Bishop Michael Yeung, in his first press conference as head of Hong Kong Diocese, also gave only qualified support to China's repressed underground Catholic Church and admitted he would never stand up to Beijing.

When asked about the cross-removal campaign by China's ruling Communist Party in Christian-heavy Zhejiang province between 2013 and 2016, Bishop Yeung said it was just a local issue at the very beginning but later involved many political elements which made it complicated.

"Is it about building safety? It might be. If it is about the safety of the building, does it have to be removed? It might be yes. But before the removal, do they have good communication?" asked the new bishop.

However, Bishop Yeung said he did not want people to come and remove the cross of his cathedral. But if there is an illegal construction and the government needs to remove it, he would not be the one to make that decision, he said.

Christians in Hong Kong and mainland China, particularly the Protestants, were upset about his remark as fresh reports of church cross removals appeared.

There have been fears that the cross campaign in Zhejiang, a province that Chinese leader Xi Jinping once ran, may be a practice run for a wider program. Now, a dozen church crosses in Jiangxi province were removed, with the latest one from a Protestant church in Shangrao city, Geyang county on Aug. 3, according to Protestant sources.

A cross in Baima township, also in Shangrao, had already been removed while "today [Aug. 3] government officials have come to our place the fourth time to negotiate lowering the cross from the church top," said a source who declined to reveal his location.

"It's disappointing. He [Bishop Yeung] does not show any mercy as a pastor," a Protestant leader in Zhejiang who ask not to be named, told ucanews.com.

"Those churches with their crosses removed were approved by the government when built. Illegal construction is only an excuse to blind people concerned about  the rule of law," the Protestant leader said.

The control on religions will only get tighter in the next 10 years, the leader added.

"Is the entire removal campaign really based on concern of 'building safety'? Yes, but it is the 'building safety of the Party's structure'," said Professor Ying Fuk-tsang, director of the Divinity School at the Chinese University of Hong Kong, on his Facebook page.

Ying, a Protestant who follows religious development in China closely, also posted an image of a letter against the cross removal that the Catholic Church in Zhejiang sent to the provincial government on July 5, 2015.

Between late 2013 and 2016, more than 1,700 crosses were removed and some churches were demolished in eastern Zhejiang province, which is home to an estimated 2 million Protestants and 210,000 Catholics.

More than a dozen of Protestant pastors and lawyers were arrested and sentenced to jail, or under long-term detention without trial. Laypeople who resisted the removal were threatened, beaten and a few died from such incidents.

Though the campaign has far greater impact on the Protestant church, Catholic Bishop Zhu Weifang of Wenzhou and his priests protested the removal on July 24, 2015 while other Catholic dioceses and bishops across China also supported their move.

Bishop Yeung was also asked if Hong Kong Diocese supports the underground church community in China. "[We will] do whatever we can do. But if sometimes we do bad things for a good purpose, both sides would suffer. We have to be careful," he said.

"There are many regulations in China and we have to respect that," he said.

Bishop Yeung also touched on other political issues such as the June 4 Tiananmen Massacre and the recent death of Nobel Peace Prize winner Liu Xiaobo.

Although what occurred on June 4 was a sad thing and he supported the students, "I am a very pragmatic person. If I know it is a hard wall, will I hit it? I won't," he said.