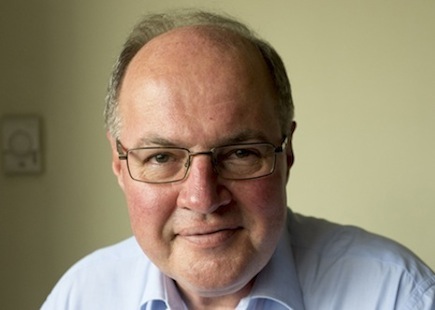 Great as the gesture of Pope Francis is to mobilize parishes in Europe to accommodate the influx of tens of thousands of asylum seekers from the Middle East (they call them migrants), the problem is more complex than offering immediate support to needy people.

The pope knows that. He's said so many times.

The pope is drawing a line in the sand. He will be called naive and said to be grandstanding. In a world where 60 million of the 7.3 billion humans on the planet are displaced, the cliche about protecting borders isn't adequate to the challenge that confronts humanity now.

The pope is saying this is a significant moment in the life of Europe and the wider world, just as Jews escaping Nazism in the 1930s confronted the world with a choice: our world is faced with a choice and our response will confirm our mediocrity or enhance our humanity.

Yet, however inspiring and absolutely correct as the responses of locals in Germany and Austria are, there's a deeper problem that impacts on Europe and also in Asia. There is no agreed way to address the issue of people movement based on shared values and with respected institutions managing a common task.

The tribes came in search of food and, along the way, they destroyed the buildings, documents and communities — in short, the cultures — of Greece and Rome.

We are seeing something like it again without the destruction of Europe. This time we are witnessing people fleeing the destruction of Syria and parts of Iraq. The catastrophe unfolding before our eyes on 24/7 newscasts is something triggered by the wrongly conceived intervention of the "coalition of the willing" led by the United States in Iraq more than a decade ago.

That event prompted the Arab Spring that became a North African Winter, missing summer and autumn/fall in between. One after another, the nations of Arab North Africa have collapsed into chaos.

The result of this conflict: refugees and asylum seekers on a scale not seen in Europe since World War II. And what has been the response of governments in countries where the migrants/asylum seekers have landed? Everything from welcome (Germany, for example) to bewilderment (Austria) to denial and rejection (Hungary).

And this year we have seen the worst humanitarian crisis in Asia — the Rohingya — since the exodus of people from Indochina after the Vietnam War. An estimated 10,000 members of this relatively small Muslim minority were lured into a modern slave trade with the active involvement of the military and slave traders in several Southeast Asian nations — Myanmar, Thailand and Malaysia.

And what has been the response of governments involved — everything from denial (Myanmar) to bewilderment (Thailand) to reluctant accommodation (Malaysia).

What is missing in both Asia and Europe? The biggest missing link in the two scenarios is any agreed way to cooperate in a regional solution to what is a regional problem.

It wasn't ever thus. Europe and North America developed a plan to handle the post-World War II crisis that then held for 40 years. The United Nations-developed protocols on the treatment of refuges that provided a set of principles and a process for handling refugees, especially those from parts of Soviet-dominated Europe.

However, for some decades, some U.N. member nations have been running down the U.N.'s resources to respond to these human crises. The U.N. just doesn't have the money to meet the challenge because participating governments see the world organization either as a tool of their opponents or believe that its operations are wasteful and inefficient. Or both.

Now, the bloated bureaucracy, the labored processes and the massive overheads that are involved in any U.N. operation mean that looking to that entity for solutions is bound to disappoint. As well, there are blockages to decisions and actions operating in the factionalized processes of the General Assembly and the Security Council that stand as an impediment to attempts at global action.

A U.N. response is all too often underwhelming because it lacks the energy and urgency needed. With no stake in the outcome, why would a supranational body want speedy responses and lasting results?

But there are alternative methods of response that include but have not been led by the U.N. In the late '70s and '80s, Asian countries impacted by the Indochinese exodus learned that it wasn't a particular country's issue but a regional one and needed a regional solution.

All the countries affected — the Philippines, Indonesia, Singapore, Malaysia, Australia, Thailand — were countries of first reception. They clubbed together with countries that had created the problem — U.S., French and Australian involvement in the Vietnam War — along with other European countries and Canada to put some shape and order into the people movement in association with the United Nations.

It was easier then than it is today to get consensus in Asia and earlier in Europe because the instruments created after World War II to meet refugee crises and the enduring force of the Cold War meant that decisions about good and bad and right and wrong were quickly made.

There were bad Communists and the right thing for good non-Communists to do was to give those oppressed by the party their freedom. At that time too, the U.S., Europeans and others in the West accepted responsibility for their part in creating the messes people were fleeing — after World War II and the Vietnam War.

There's not much evidence that anyone is accepting responsibility, much less committing to doing anything about the messes today — in North Africa, the Middle East or Asia.

But perhaps it's time to face the fact that the instruments we've inherited from the Cold War don't fit any more or provide definitions that work in a post-ideological, but not post-religious world.

The disarray in all three regions has distinct causes for each instance. Conflict and victimization on religious grounds are common to each. Politics and ideology take a back seat to tribal bonds and affiliation to particular religious groups among the great religions (Judaism, Islam and Christianity).

1. A revised refugee charter that accommodates the realities that contribute to the creation of asylum seekers today that go beyond Cold War categories including religion but also economic conditions created by conflicts that make life unsustainable for many, e.g. Iran until recently impoverished by Western sanctions; and

2. Regional processes that draw together firstly those countries involved in the creation of a crisis as well as those willing to be part of its solution who may or may not have been part of creating the mess in the first place but can certainly help fix it.

Inherited categories and existing institutions aren't equal to the challenges today. Why should they be? They were invented and developed for another time and place. It's time for new wine skins for the new wine.

Jesuit Father Michael Kelly is executive director of ucanews.com and based in Bangkok, Thailand.