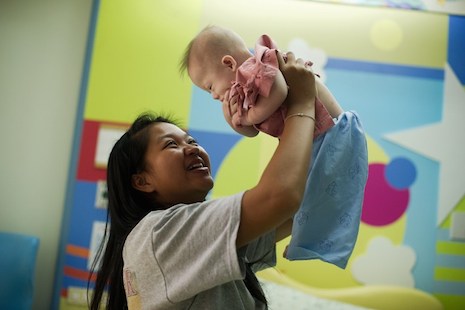 Thai surrogate mother Pattaramon Chanbua (left) plays with her baby Gammy, who was born with Down syndrome, at a hospital in Chonburi province last year (AFP Photo/Nicolas Asfouri)

Share this article :
A new prenatal test for Down syndrome promises to be simpler and less expensive. But it could increase pressure on expectant parents to abort a child they think will be disabled, experts say. It could also add to the stigmatization of persons who have Down syndrome. The new test, described in the journal Clinical Proteomics, can be conducted at home with a urine sample early in a mother's pregnancy. It has been found to have a greater than 90 percent detection rate and can provide a result in around a minute, according to Britain’s ITV. Those who receive a result indicating a higher risk of Down syndrome will be offered a further diagnostic test, such as amniocentesis or chorionic villus sampling, to confirm results. But Dr Stephen Butler, chief scientific officer at MAP Diagnostics, which developed the test, told the Daily Mail that the procedure will “offer choice to women, and their partners, much earlier in pregnancy to enable difficult decisions to be made with confidence and without any additional pressures of time”. MAP’s Ray Iles added that the company was trying to bring the test to as many women around the world as possible within the coming months. “We understand the anxiety every parent faces not knowing whether their baby will be affected by this serious disability and this has driven us to persist with our research.” Iles said the test was far more affordable than another screening method, non-invasive prenatal testing (NIPT), which is currently only available in private hospitals in the UK. David Prentice, vice president and research director with the Charlotte Lozier Institute, said that while there are “a few cases where it's helpful to know” test results, such as being prepared at birth for special care, most tests are used for eugenic purposes. “That's the sad attitude behind these tests, to ‘screen out’ individuals considered less worthy,” said Prentice. The Charlotte Lozier Institute, according to its website, promotes "deeper public understanding of the value of human life, motherhood, and fatherhood, and to identify policies and practices that will protect life and serve both women’s health and family well-being". Mark Bradford, president of the Jerome Lejeune Foundation USA, said that a December 2014 study conducted by the New England Center for Investigative Reporting indicated that non-invasive prenatal screening “is being used as diagnostic by some women resulting in decisions to abort without a confirming invasive test.” “Logic would indicate that making a test for Down syndrome as easy and as inexpensive as a pregnancy test removes the insurance and cost factor, and also the role of a healthcare professional from the process of screening for fetal anomalies,” said Bradford, whose foundation is named for the geneticist who first identified the chromosomal nature of Down syndrome. “In some cases that could be a good thing, but I fear that in most it could result in an easy appointment for an early abortion shortly after the test is taken at eight weeks.” Bradford added that continued development of such prenatal testing methods with Down syndrome as the primary target “only serves to reinforce a flawed perception of Down syndrome, i.e., that it is a horrible birth to be avoided at any cost”. More accurate test The cell-free DNA blood test, which finds small amounts of floating DNA from the fetus in the mother's blood sample, can be given to a woman when she is between 10 and 14 weeks pregnant. Researchers studied nearly 16,000 women, and found that the cell-free DNA blood test correctly identified all 38 fetuses with Down syndrome in the group, said the study in the New England Journal of Medicine. However, standard screening given to the same women found only 30 of the 38 cases of Down syndrome.  Standard screening consists of drawing blood to test for hormones and proteins associated with chromosomal defects, combined with an ultrasound that checks for excess fluid in the back of the fetus's neck, in an area called the nuchal fold.  Standard screening also returned far more misdiagnoses, with 854 false positive results, compared to nine false positive with the cell-free DNA tool. When it came to identifying other, less common chromosomal abnormalities, the cell-free DNA test was more accurate than standard screening.  "Among 10 cases of trisomy 18, also known as Edwards syndrome, the cell-free DNA technique pinpointed nine and flagged one false positive," said the study led by Mary Norton, professor of clinical obstetrics and gynecology at the University of California, San Francisco.  "With standard screening, eight were identified and there were 49 false positives," it added. Cell-free DNA testing found two cases of another disorder, trisomy 13, also known as Patau syndrome, and flagged one false positive. Standard screening found just one case of trisomy 13 and mistakenly diagnosed 28 fetuses. Researchers cautioned, however, that the cell-free DNA test is unable to find a range of abnormalities that can show up in standard screening. The team also found that "a surprisingly high number" of disorders turned up in 488 pregnant women whose plasma was disqualified for testing because it had inadequate or an immeasurable quantity of fetal DNA, or other problems interpreting test results. A total of 2.7 percent of these fetuses were found to have chromosomal defects, "markedly higher than the 0.4 prevalence in the overall group," said the findings. Since this group was excluded from the final analysis, the success rates of the cell-free DNA test may be skewed high in the report, the authors said. "Those women who do opt for cell-free DNA testing should be informed that it is highly accurate for Down syndrome, but it focuses on a small number of chromosomal abnormalities and does not provide the comprehensive assessment available with other approaches," said Norton. Original story: New Test for Down Syndrome Could Increase Abortions, Stigma, Experts Warn Sources: Aleteia and AFP