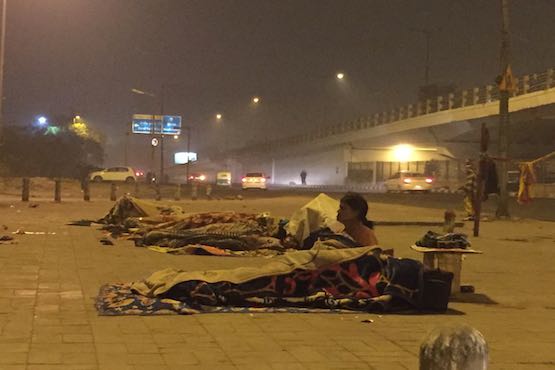 Homeless people spend their nights in the open with bare minimum to cover themselves in Sarai Kale Khan and Nizamuddin areas of New Delhi on Dec. 8. (Photo by Ritu Sharma)

Sarju Singh, a daily wager, calls it a day and prepares to sleep on a pavement in the outskirts of New Delhi. As he spreads out a dirt-encrusted blanket, he worries about the cold, foggy weather that is going to get worse in the coming days.

Singh, who comes from the eastern Indian state of Bihar, came to the national capital in search of work. Earning a meager 250 rupees (US$3) per day, he says that he cannot afford to rent a room.

"Some days I do not even get work so the income is irregular. Sleeping on the pavement is the only option. The summer season is fine but winters are a problem as it gets unbearably cold," Singh said.

People like Singh, who migrate from remote or smaller towns to work in large cities, often end up with nowhere to go. Homeless people in New Delhi on Dec. 8. The number of rough sleepers in the city outnumbers the number of beds in government and church-run night shelters. (Photo by Ritu Sharma)

Even though the Delhi government has set up night shelters for the homeless, Singh, who spends his nights on a pavement in Delhi, says he prefers to sleep outside, as the shelters are crowded and dangerous.

"The night shelters around this area are cramped and accommodate more people than their capacity. Also, there are drug addicts and drunkards who engage in petty fights making it unsafe to stay there," Singh said.

He said that the shelters are not even cleaned properly and "they smell very bad. Also, some of the people living there have contagious diseases like tuberculosis."

New Delhi has 261 homeless shelters including permanent facilities, cabins, and tents. In some cases, subways have been converted to shelter people at night.

These shelters can accommodate over 21,000 people, according to the New Delhi Urban Shelter Improvement Board.

They include migrants, people abandoned by their families, beggars and drug users.

To provide relief, Christian agencies like Chetnalaya, the social service wing of the New Delhi Archdiocese, have set up a night shelters of their own. Homeless people use a night shelter run by Chetnalaya. Some 250 people can take rest at a given time in the shelter that has been running for 10 years. (Photo by Ritu Sharma)

For the last 10 years, the social service agency has been providing much-needed relief to homeless people during the winter months by offering the basement of St. Columbus School as a shelter. They can accommodate 250 people and have separate rooms for men and women.

Presently, there are around 60 people sleeping there but the "number increases as the temperature goes down," said Father Savari Raj, director of Chetnalaya.

Apart from providing mats and blankets, the night shelter also has clean toilets, something of a luxury compared to the facilities in government shelters.

Vijay Khadse, who comes from the western state of Maharashtra, stayed in a government night shelter until last year but said the "situation was not good."

"It was a temporary shelter with smelly mats and no toilet. I never liked it there and used to go only when it got unbearably cold," said Khadse, who works as a waiter in a catering company in New Delhi.

For the past few days, he has been staying in Chetnalaya's night shelter. "An acquaintance told me about this place and I came here. It is clean and safe. I plan to spend the rest of the winter here," he said.

Father Raj said that they are also willing to help other church institutions start shelters for the homeless.

Khadse, who hopes to spend a comfortable winter in the shelter, said that homeless people have nowhere to go. They are already facing difficult times living on the streets.

"A sound, cozy sleep at the end of the day makes you forget the hardships in life. All a person wants is a clean place where he can take a few hours of rest," he said.

Watch this short ucanews.com video to see more of the conditions that the homeless endure in New Delhi: