Jinsadong Church in Sinijiu, North Korea, which was destroyed in the Korean War.

When Jinsadong Church in the North Korean city of Sinijiu on the Chinese border was bombed and destroyed in the Korean War, it seemed it had been lost forever, so too the chapel of Saint Benedict monastery in Tokwon in the east of the country.

As Kim Il-sung cemented his rule of the northern half of the Korean peninsula following the end of the war in 1953, religion all but died here and the churches were never rebuilt, at least not north of the Demilitarized Zone (DMZ).

But last Tuesday, the 63rd anniversary of the outbreak of the Korean War, South Korea’s Catholic Church consecrated the Church of Repentance and Atonement in Paju just 20 kilometers south of the truce village of Panmunjom on the DMZ.

The exterior of this new church is based on the design of the Jinsadong church, while the interior is modeled on that of the St Benedict’s Monastery Chapel.

“The design is aimed at reminding people of the fact that the Church in the South still remembers Catholics in the North,” said Father Jerome Chang Keung-sun who designed the Paju Church.

For him, the long-destroyed Jinsadong Church holds a special significance. His father was baptized there in the 1930’s when the Korean peninsula was undivided, albeit under Japanese imperial rule.

It was during this period that the US-based Catholic missionary society Maryknoll was concentrating its efforts on northeast Asia, particularly in China and Korea, as it built dozens of churches including Jinsadong.

In 2003, Fr Chang traveled to the Maryknoll headquarters in New York in search of documents which would help him reconstruct aspects of this North Korean church.

Luckily, he found a few photographs and work started on designing the new Paju church. Details of the Tokwon Chapel were retrieved from another Benedictine Monastery in Daegu in the South.

“This means that the churches of North Korea never truly disappeared,” he said.

It proved to be the perfect time to work on such a project.

Three years earlier, then North Korean leader Kim Jong-il and his southern counterpart Kim Dae-jung held a landmark joint summit in Pyongyang that paved the way for the what became known as Seoul’s ‘Sunshine Policy.’

The south’s Ministry of Unification gave subsidies to build the Paju church as construction was led by Seoul archdiocese.

Fr Chang, an expert in religious icons, designed the interior himself and modeled the shape on that of the Tokwon chapel interior. He then proposed that the Mansudae Art Studio in Pyongyang work together on the design.

A sprawling building in central Pyongyang’s Pyongchon District near the main Taedong river, Mansudae was under the “special guidance” of then dictator Kim Jong-il at the time and was more accustomed to churning out propaganda images around the Kim clan personality cult than producing Christian works.

“It did not make any response to my proposal,” said Fr Chang.

But after relaying another invitation through a Korean-Chinese broker, the North finally agreed to allow some Mansudae artists to do the work in the Chinese border town of Dandong, opposite Sinuijiu in 2004.

“The North Korean artists worked in a borrowed gym in China for 40 days,” said Fr Chang who was not allowed any contact with the group on strict instructions from the North. “While they were working, I checked the process by receiving photos over the internet.”

The mosaic they constructed included an image of Jesus in its center flanked on both sides by eight of the 103 Korean martyr saints canonized by Pope John Paul II in Seoul in 1984. Among them, St Peter You Jeong-yul was from Pyongyang and saints Barbara Ko Soon-I and Alex Wu Sae-young were from Hwanghae-do province in the North.

It is not known what the North Korean artists made of these images, if anything at all.

The state of Christianity north of the DMZ is almost completely unknown. According to some theories, the first North Korean leader Kim Il-sung had all but eradicated Christianity by the 1960s.

In 2006, the Paju church was finally completed a year before relations began to deteriorate with the new presidency of Lee Myung-bak who took a harder line on the regime in Pyongyang.

“Now, this kind of joint work between the North and South Korean artists would be unimaginable. However, at that time … the inter-Korean relationship was good. It seemed like reunification would come soon at that time,” said Fr Chang.

An adjacent national reconciliation center in Paju had been planned for completion at the same time as the church but politics have gotten in the way. Funding dried up as inter-Korean ties worsened, delaying the consecration of the church for seven years.

But when Uijeongbu diocese took over Paju from Seoul this year, it decided to move ahead with the church consecration last month.

Father Timothy Lee Eun-hyung, chaplain of the church, said: “I hope that this place is used for prayer for the reunification and evangelization of North Korea.” 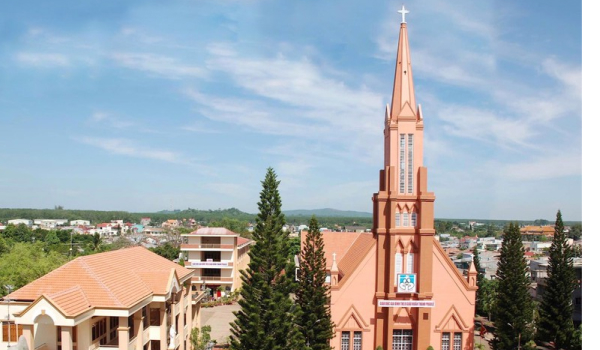