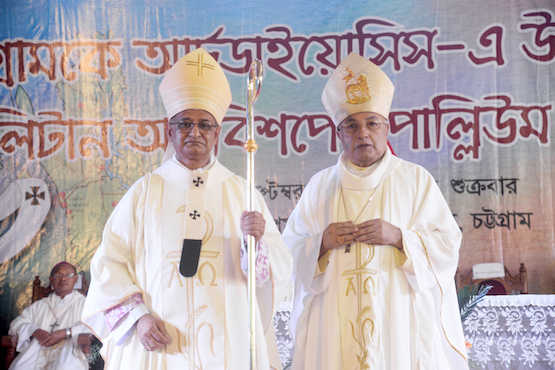 Archbishop Moses M. Costa (left) with Apostolic Nuncio Archbishop Geroge Kocherry during a ceremony to mark the elevation of Chittagong Archdiocese and investiture of the pallium on the new archbishop of Chittagong on Sept. 8. (ucanews.com photo)

Several thousand Bangladeshi Catholics have attended a ceremony for the elevation of Chittagong Diocese to an archdiocese and the investiture of the pallium on Archbishop Moses M. Costa.

A pallium is a band of religious cloth woven from white lamb’s wool and decorated with six crosses. It symbolizes Jesus Christ, the Lamb of God and the Good Shepherd. An archbishop wears a pallium to symbolize his pastoral and judicial powers vested in him by the pope.

Pope Francis elevated Chittagong to an archdiocese and appointed Bishop Costa as its first archbishop on Feb. 2.

Apostolic Nuncio Archbishop George Kocherry presided over Mass to mark the event in Chittagong on Sept 8.

All bishops and hundreds of priests as well as laypeople from throughout the country attended the program.

A reception that followed included government officials, diplomats and intellectuals as well as religious and social leaders.

This year Pope Francis handed over Pallium to 36 new archbishops, including Archbishop Costa, at the Vatican on June 29.

To ensure greater participation of the faithful and to move away from so-called "airport bishops," the Pope Francis decided that the pallium should be vested on each archbishop at a ceremony held in his own archdiocese.

Archbishop Kocherry said the new archdiocese shows the growth of the Catholic Church in Bangladesh.

In 1518, Portuguese merchants arrived in Chittagong, bringing Christianity to East Bengal (now Bangladesh). Chittagong was erected as a diocese in 1927. Today, it territory covers eight civil districts and has about 32,269 Catholics.