New 'bishops' in China a problem for the Vatican

They're considered radical even among the underground community 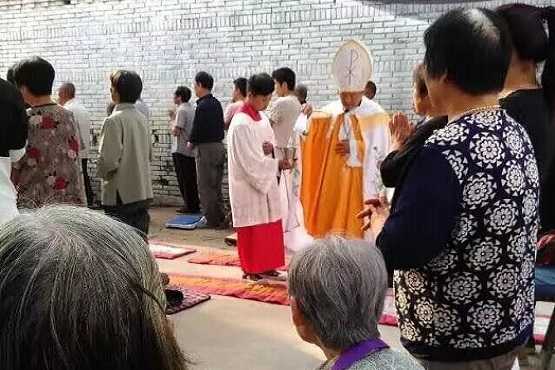 Father Dong Guanhua, self-made Bishop of Zhengding, celebrates a Mass in northern Hebei province in this image taken on an unknown date in 2016. (Photo supplied)

The Holy See is facing a new challenge in China with at least two new "bishops" being "ordained" without papal — or even government — approval just as it is trying to resolve the issue of bishop appointments by striking an unprecedented deal with China's ruling Communist Party.

The new "bishops" come from the underground church community and are not recognized by either the Vatican or the Chinese state, unlike the existing eight bishops in the mainland who were ordained without Vatican approval but with government backing — the source of the church's core frustration with Beijing.

Father Paul Dong Guanhua from Zhengding in northern Hebei province announced during Sunday Mass on May 22 that he had been secretly ordained as a bishop 11 years ago, using rules which may or may not be permitted to be invoked — adding further to the fissure in the church in China.

He made public his "episcopal" status by wearing his mitre and holding his staff on Sept. 11, according to a source in Zhengding, a stronghold of the underground community counted among the province's 1 million Catholics.

Father Dong even posted his phone number on a popular Chinese Catholic website and on his blog recently calling for anyone wanting to become a bishop to approach him.

"I was ordained by an elderly bishop in 2005 but I will not tell you whom," Father Dong told ucanews.com.

Father Dong denied rumors that he has in turn ordained Father Wang Chengli, apostolic administrator of Heze in eastern Shandong province, or that there are five more self-styled bishops who do not have papal or government recognition.

But Father Dong did admit that he ordained a 51-year-old bishop on Sept. 7 this year. "It's dangerous to reveal who he is under government surveillance," he said.

These defiant bishops vowed to follow the path of the late Bishop Fan Xueyan of Baoding, also in Hebei, who strongly opposed the Chinese Catholic Patriotic Association (CPA) which is accused of controlling the church for the communist government.

Pope Benedict XVI's pastoral letter to Chinese Catholics in 2007 stated that the CPA is incompatible with church doctrine as its constitution advocates an independent church principle.

Bishop Julius Jia Zhiguo of Zhengding, who is approved by the Vatican but not recognized by the government, announced in a statement on Sept. 13 that Father Dong has incurred automatic excommunication reserved to the Apostolic See according to Canon Law Article 1382 for accepting episcopal consecration without papal approval.

However, Father Dong, with several hundred followers, claimed he was ordained under special faculties that the Holy See granted to the Chinese church in the 1980s, which gives power to bishops to ordain successors in times of persecution.

An image of Father Dong Guanhua, self-made Bishop of Zhengding, celebrating a Mass in northern Hebei province on an unknown date in 2016. (Photo supplied)

Church sources close to the Vatican confirmed to ucanews.com that Pope Francis intends to pardon the eight government-appointed bishops during the Year of Mercy as reported by Reuters on July 14. The Year of Mercy ends Nov. 20.

"The pope has been stressing mercy. If he pardons the government-backed bishops for the sake of negotiations, will he show the same mercy to these defiant underground bishops or excommunicate them?" said Father Joseph, an underground priest in Hebei.

There is concern about how the Vatican-unapproved bishops will affect the ongoing China-Vatican negotiations as the next round is due to take place late October. The Holy See hopes Beijing will accept 30 underground bishops into the government-sanctioned bishops' conference when an accord is achieved.

"In the eyes of Beijing, it is just a number of illegal religious personnel be it 30 or 32," said Father Joseph. "The authorities will continue to detain or arrest us or remove us from the diocese if they think it's necessary."

The new self-styled "bishops" are considered radical even among the underground community, and their ordinations have sent shockwaves among Catholics across China after news spread Oct. 10.

On social media and Catholic websites, some Catholics, apparently coming from the open community with links to the CPA, mocked the "so-called loyalty" of the underground community and accused them of hurting the communion of the church.

Underground Catholics in general see the appointments as violating church law but they think it is time for the Holy See to review its China policy and be clear on its stance.

"The Vatican does not appoint bishops but only apostolic administrators for the underground community. It has adopted double standards or ignored irregular issues that could have been settled if it followed canon law," said Father Joseph from Hebei.

The Vatican excommunicated three government-backed bishops for the first time in 2011-2012 and pardoned or kept mute on other bishops who accepted or presided over the episcopal consecration. It stressed that such episcopal ordinations are canonically illegal but sacraments administered by the unapproved bishops are valid.