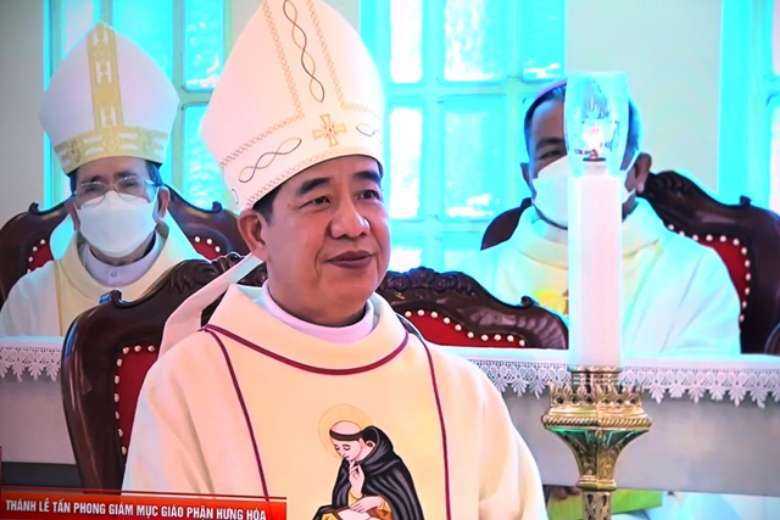 Vietnam’s youngest bishop was ordained on St. Valentine’s Day and is expected to promote unity and love in the country's largest diocese made up of multiple ethnicities, cultures and languages.

The ceremony, attended by Singapore-based Archbishop Marek Zalewski, the non-resident representative of the Holy See to Vietnam, 23 archbishops and bishops, hundreds of priests and religious from other places, was aired online due to Covid-19 protocols.

Bishop Alfonse Nguyen Huu Long of Vinh said Bishop Tien, whose episcopal motto is unity and love, chose the day of the patron of love St. Valentine for his ordination.

Unity and love are vital for the Catholic Church and the new bishop takes the leading role in ensuring the unity and love of all Catholics in his diocese, he added.

The prelate said a bishop is considered as a tree trunk so that the sap of God's love circulates in that tree and spreads to its branches, leaves, flowers and fruits.

The provinces of Dien Bien, Lai Chau and Son La, which were considered to have no religion by the government, were now home to over 10,000 Catholics

Bishop Long, who served Hung Hoa Diocese for over five years as auxiliary bishop, said that since 1998 the diocese serving over 30 ethnic groups in nine provinces and a part of Hanoi has been keeping to its pastoral plan to build communities of strong faith, fervent prayer, overwhelming love and ardent missionary spirit.

He said the plan has borne various fruits of unity and love, which he hopes the new bishop will continue.

Bishop Tien said it is important to do re-evangelization work among Catholics who could pay little attention to their faith practice due to wars and restrictions on religion. Catholics dominate only 10 out of 120 parishes while the rest were a mix of various faiths and ethnic groups.

Local authorities admit that local Catholics help maintain social order, but it is necessary to foster awareness about living out faith and bringing Christian values to other people, he said.

The ninth bishop of the 127-year-old diocese recalled his days as a seminarian at the Bishop’s House two decades ago, riding on motorbikes with fellow seminarians to an old parish 70 kilometers away to hold catechism courses for the local people who had not attended a Mass for half a century due to wars.

The courses took place from 9-11pm at locals' houses and the seminarians slept at someone’s home to return the next day morning. The courses were held twice or thrice a week and those who managed to complete them successfully were baptized and administered other sacraments at the Bishop’s House on Christmas, Easter and other solemn feasts.

Bishop Tien said the diocese re-established the parish after the number of baptized people grew to a few hundred in a couple of years. The provinces of Dien Bien, Lai Chau and Son La, which were considered to have no religion by the government, were now home to over 10,000 Catholics.

Hung Hoa Diocese has 260,000 Catholics including 20,000 ethnic villagers in 137 parishes and 700 subparishes and mission stations served by 178 diocesan priests.