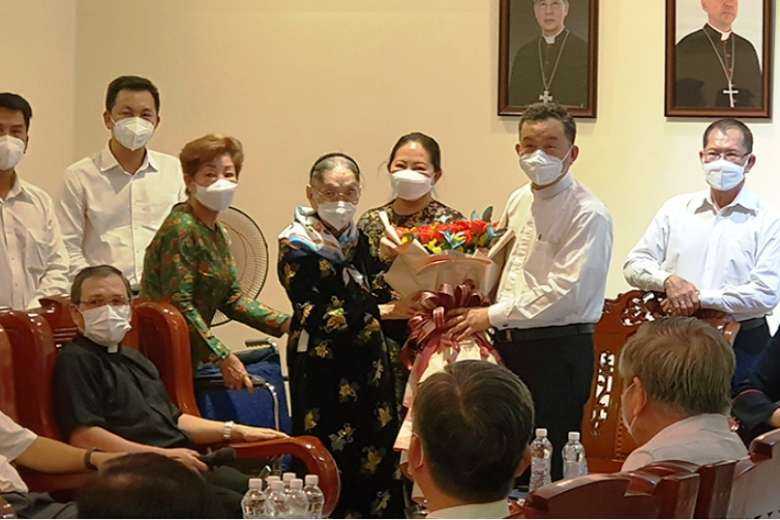 Pope Francis has named a scripture professor in the southern archdiocese as coadjutor bishop of 138-year-old Bac Ninh Diocese in northern Vietnam.

Father Joseph Do Quang Khang, who serves as vice-rector of Sy. Joseph Major Seminary in Ho Chi Minh City, was congratulated by Archbishop Joseph Nguyen Nang and tens of priests from the local seminary and the pastoral center.

Archbishop Nang said the local Church is ecstatic about having a new bishop who is an enthusiastic deputy and scripture professor. He said he had encouraged Father Khang not to refuse the new duty assigned to him.

Father Khang’s family including his mother and four brothers and sisters were present on the occasion.

The announcement was made by Father Francis Xavier Nguyen Van Thang, chancellor of Bac Ninh Bishop’s House, on Oct 30. The date of his episcopal ordination will be announced soon, he said.

Father Thang called on local Catholics to gratefully thank God and pray for the bishop-designate for his new position.

Bishop-designate Khang is the fifth Vietnamese prelate of Bac Ninh Diocese, which was established in 1883

Bishop-designate Khang said he is happy to be a child of the archdiocese and asked local Catholics to pray for and support his new position. He said he feels some concern about his new responsibility at the diocese, which is home to his family.

Born on Nov 7, 1965, in Ho Chi Minh City, the bishop-designate has nine siblings. His parents, who moved to the city during the exodus in 1954, were from Hoang Mai Subparish in Bac Giang province under the administration of Bac Ninh Diocese.

He used to teach at a local school and work on public plantations before entering the major seminary in 1993.  After his priestly ordination in 1999 and serving at a parish, Father Khang further studied the scriptures in Toulouse in France and Rome in Italy from 2001 to 2010.

He returned home in 2010 and started to teach at major seminaries and church institutes until his nomination. He has served as vice-rector of the major seminary in Ho Chi Minh City since 2020.

Bishop-designate Khang is the fifth Vietnamese prelate of Bac Ninh Diocese, which was established in 1883. He will succeed Jesuit Bishop Cosme Hoang Van Dat, who is 74 years old.