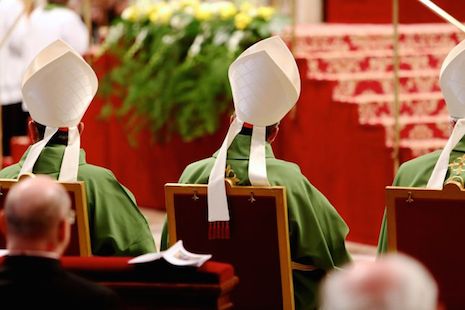 Share this article :
Pope Francis' newly elevated cardinals reflected on their roles as shepherds within a vast, multicultural Church — and the many challenges and opportunities of service the modern world poses to their peripheral dioceses. Cardinal Soane Patita Paini Mafi of Tonga said being named a cardinal is a “really big thing” for the small Pacific island nation, which has never had a cardinal before. He said that Pope Francis' choice reflected a vision of a Church that is “inclusive of the 'little ones'.” Cardinal Mafi said the people of Tonga who traveled to Rome “come with pride, with a sense of belonging to the Church”. He said he hopes and prays that their faith “will be deepened, deepened by this new call and responsibility to me”. Cardinal Mafi explained that Tonga’s pastoral challenges include the response to a “globalized world”. “We are no longer isolated in a way, because communication now will bring us together closer,” he said. “It brings good things, and also challenging aspects, and there can be some challenge to the faith, like secularism, materialism, individualism.” “We people are very much communal, we still live together as families, very much a big value for us. So I think there is a big challenge for us, for the faith, (in) that the people have more opportunities now economically and so forth.” Other new cardinals also reflected on the state of their home countries and the February 14 consistory. Cardinal John Atcherley Dew of Wellington, New Zealand said he received an “incredible welcome” from the cardinals that has reinforced for him “that we belong to the universal Church, and that we’re not just a little place isolated on our own”. Cardinal Dew said among the pastoral challenges in New Zealand is the “multicultural nature of the Church”. “We’ve always had people from other countries, like a lot of European people after the war, in the 1950s and 1960s,” he said. There have also been major waves of migration from Polynesian people. Lately, there have been many migrants from various Asian countries. “Involving them, and including them in the life of the Church, is a very big challenge,” he said. Another of the new cardinals hails from Thailand. Cardinal Francis Xavier Kriengsak Kovithavanit of Bangkok reflected on Pope Francis’ statement that becoming a cardinal “is not something that is given for your honor” but rather for “service and love”. The cardinal said his Buddhist friend who came for the ceremony repeated these words to him. The cardinal added: “this is the way of a Christian, is a way of a priest or bishop, and also a cardinal”. Cardinal Kovithavanij said that secularism is a “really strong” challenge not only in Thailand, but “everywhere in the world”. “Not only for the Christian Catholics, (but) also for all men and women of religion. They need to collaborate together,” he said. He added that he wants to bring back to Thailand his experience as a Christian who “wants to live the gospel, and also give this good news to everyone”. Full story: New cardinals speak out on perils, potential of a globalized society Source: Catholic News Agency