Korea seeks to stem export of babies to overseas families 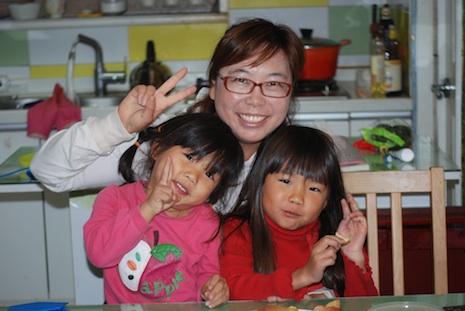 Oh Min-ha with her adopted daughters

Since the end of the Korean War, just less than a quarter of a million South Korean children have been adopted. A large majority of them – 164,612 – were adopted by families overseas, according to the Health and Welfare Ministry. This makes South Korea the world’s fourth largest "orphan exporter" after China, Russia and Guatemala. It is also a reversal of the worldwide trend, where statistics show that 85 percent of adopted children remain in their countries of birth. What is the reason for this anomaly? “Koreans are rather picky in adoption, preferring girls, the same blood type as the parents and good health,” says Suh Suk-kyung, director of the Holy Family Child Adoption Center, Korea’s only Catholic-run domestic adoption center. “As a result, parents may have to be found overseas for boys and children with disabilities.” The center was established in 1989 by the late Cardinal Stephen Kim Sou-hwan who was concerned about the numbers going overseas and wanted to offer Korean children for domestic adoption only. Now it seems that the government has come round to Cardinal Kim’s way of thinking. It encourages domestic adoption by paying all the adoptive family’s adoption expenses and health insurance until the child turns 18. If psychological therapy or counseling is deemed necessary for the child, which is often the case, the government pays the fees. And with the Special Adoption Law which was passed in August, it also tightened up procedures and brought in a more transparent process, a much more stringent registration system and better protection for the children. These moves may help to stem trafficking and human rights abuses, but they present a new problem; they now make it mandatory for an adopted child to clearly have the word “adopted” on their identity papers. In this Confucian society, birth out of wedlock is still seen as highly shameful – and adoption carries much of the same stigma. Reverend Lee Jong-rak has been running a ‘Baby Box’ in Seoul since 2009, where mothers can leave unwanted babies. He says his intake is increasing, with mothers leaving notes saying they have no alternative, “because of the new law.” Oh Min-ha was diagnosed with infertility one year after her marriage, around 12 years ago. She adopted two daughters, but says she often experiences “inner conflict" over whether she should tell people, because of the social prejudice against adopted children. But Pyoun Mee-hee, professor of welfare at Baekseok University, believes these problems are transitory. Ultimately she believes the new law will bring benefits, especially for adoptees who may want to find their roots later. “This is a transition period,” she says. “Let’s wait at least six more months and see.” Related report Church domestic adoption center marks 20th year