The remote, mountainous, impoverished nation is ranked seventh highest in the world for suicide rates by WHO 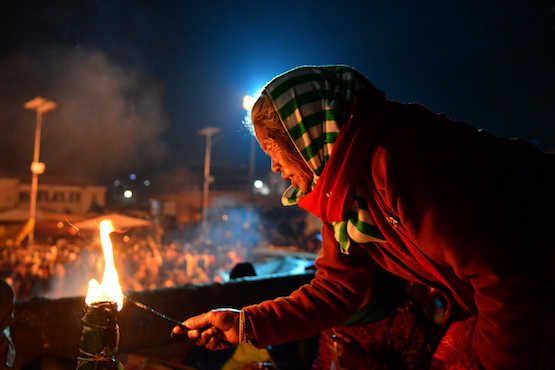 A Nepalese Hindu devotee lights an oil lamp in memory of deceased family members at the Pashupatinath Temple in Kathmandu in this file photo. (Photo by Prakash Mathema/AFP)

Five-year-old Purna Tamang managed to survive the 2015 earthquake and its many aftershocks under the loving protection of his grandma. Their home and lives came tumbling down in Sindhupalchowk, one of the districts with the highest casualty rates.

In the aftermath, his father struggled to cope with the trauma of the quake. The gloomy outlook he saw for his family led to an emotional breakdown and he hanged himself. As Purna's mother had left the family when he was aged 18 months, he was left orphaned at a very tender age.

The rate of suicide in Nepal in recent years has reached endemic proportions. Far too little is known about this scourge on our society. Such incidents rarely find their way into newspapers. When they do, it is often poorly reported and a social analysis of the situation is usually absent.

Nepalese police reports recorded an increase in suicides from 3,751 in 2011-12 to 4,674 in 2015-16. That's almost 13 suicides a day. These figures don't even account for failed suicide attempts or the deaths of Nepalese migrant workers abroad.

Records show suicide by hanging is common within communities living in the mountainous areas of Nepal. Another common practice is the ingestion of poison in the Terai areas. A 2016 study conducted by the International Medical Corps showed that 25 percent of the people living at the epicenter of the quake in Gorkha and the Sindhupalchok districts have experienced suicidal tendencies.

From neighborhood to neighborhood, similar heart-wrenching stories are found. The increasing rate of incidences of suicide is a clear indicator of worsening social situations and a major cause for concern. In its 2012 statistical model, the World Health Organization (WHO) ranked Nepal seventh highest in the world for suicide rates at 25 in every 100,000 people. So when they recommend a national strategy to address the country’s suicide burden, the government of Nepal should listen.

Suicide rates for women are higher than for men, largely due to domestic violence, social discrimination, alcoholism and polygamy. Many incidences are linked to depression resulting from poverty, political instability and a lack of opportunities among many others. Women at reproductive age are particularly vulnerable.

Other groups considered to be of particular high risk are unemployed youth, divorced or single people, displaced people, illicit substance users, members of broken families and victims of sexual abuse. Once you have time to catch your breath, you might well question: are there any groups in society left untouched by the social disease?

Each traumatic act of suicide leaves behind family members and friends who experience new pressures and painful experiences as well as the associated social stigma.

Further compounding the social pressures and poverty issues are mental health problems that emanate from 10 years of armed conflict, frequent natural disasters, social injustices and cultural superstitions within Nepalese society. A common, prevailing misconception on the cause of mental health in Nepalese communities is evil spirits or the fruits of bad deeds by an individual, their parents or forefathers. Here, education plays an important role in dispelling the myths.

Suicide is a complex social issue that needs sustained investment and leadership by the government. Mental health issues, including depression, are not often talked about openly in Nepali society and a failure to address these problems leads to the most morbid of outcomes.

In Kathmandu, a 24/7 helpline has been established by the metropolitan police to offer counseling as a suicide prevention measure. Sadly, this feels like a piecemeal development. Most people have no access to basic mental health care. One comment a medical professional made on the subject truly resonated with me: "People with mental and psychosocial disabilities not only miss out on developmental initiatives, but are excluded from the benefits to which they are entitled."

In other words, people suffering from mental health problems have no access to health rights.

As advocated by the WHO, Nepal needs an overarching national health development policy. To start with, this involves identifying the major stakeholders in suicide prevention at the national and community levels. Suicide prevention demands a multi-sectoral approach, involving health care professionals and representatives from other sectors. The role of non-government and community-based organizations cannot be underestimated, particularly where public sector action is weak or absent. A collaboration between traditional healers and public health services may also help to reach the people in remote, traditional communities.

In Nepal, the failure of our society to provide adequate public and community support mechanisms is a blight on our human decency and Christian values. For example, women should never feel threatened or insecure in their own home. Little or no access to emergency or support services only serves to exacerbate their psychological vulnerability. In a well-functioning society, non-government organizations pick up the slack of the state to offer counseling services, operate helplines, conduct research, conceptualize and implement public education programs and work with the media. But this requires a joined-up approach to ensure full national coverage.

Such prevention starts in the home, through mutual sharing and caring for one another within the family unit. But more funding and resources must be allocated by our government institutions to ensure health specialists and primary care providers are better trained in the provision of mental health education and care.

As the WHO stipulates, "Without a suicide prevention strategy, governments cannot put in place mechanisms to address this issue in a sustained manner."