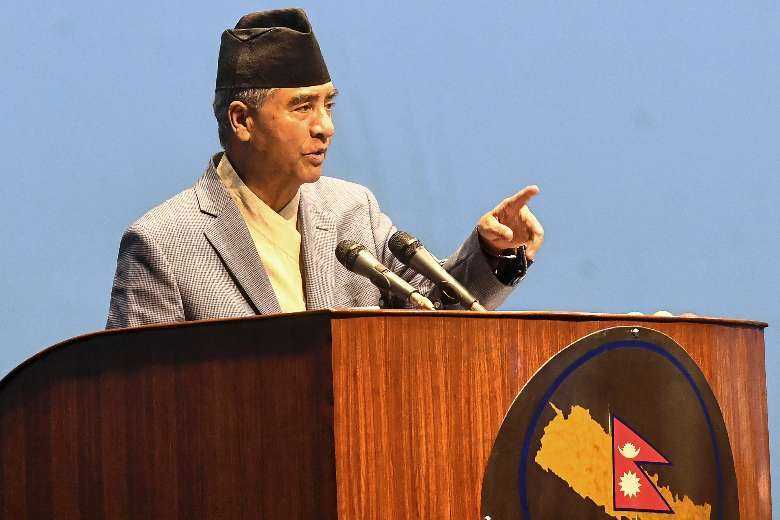 Sandwiched between the world’s two most populous nations, Nepal is infamous for its political instability. The landlocked Himalayan country has seen 11 prime ministers in the past 30 years.

It is not that Nepal has not shown the desire to escape its status as a landlocked nation and become a land link, a zone of peace, in the sensitive hotpot of the Himalayas. But this means different things for the two Asian superpowers — India and China.

The process started in the 1970s was viewed with suspicion and apprehension from both New Delhi and Beijing.

Due to its geopolitical vulnerability, Nepal’s prime minister has to play his political cards well. Either he has to be pro-India, as is the case with the incumbent Sher Bahadur Deuba, or a China-leaning India basher, as was the case with his immediate predecessor, KP Sharma Oli.

China and India have huge stakes in ensuring stability in the Himalayan nation and their goodwill and economic aid can make a critical difference to this underdeveloped economy of 21 million people.

Fueled by intra-party feuds, personality clashes, vaulting ambitions and lust for power, political instability has remained part and parcel of Nepal’s politics even after the country adopted a new constitution in 2015.

Deuba, a 75-year-old veteran, became prime minister for the fifth time after Nepal's apex court reinstated the House of Representatives or lower house of parliament, which was dissolved by Oli in May.

The Supreme Court also upheld Deuba’s claim to be the new leader and asked Oli, heading a caretaker government until planned elections next year, to make way. Deuba was sworn in on July 13.

But Oli’s hold on power was weakened by political feuds as he refused to honor an agreement to hand over power after half his term.

His decision to dissolve the lower house was challenged in court by opposition parties, who claimed the support of a majority to form a new government.

Deuba’s Nepali Congress holds 63 of the 275 seats in the House of Representatives. However, it teamed up with disgruntled members of Oli’s erstwhile coalition, including the Maoist faction of the Communist Party of Nepal, to secure a majority.

Earlier, Deuba became prime minister in 1995, 2001, 2004, and 2017, but he has never completed a full term. This time his tenure lasts until the parliamentary elections slated for next year.

Deuba, who has already proved his majority in parliament, is likely to bring Nepal back to the Indian camp. Communist Oli preferred close ties with China.

Nepal and India have close geographical and cultural ties dating back centuries. Hinduism is the main and largest religion in both nations.

No matter which party is ruling the Himalayan nation, India has always exerted its power.

Nepali Congress, which Deuba heads, was started by Bishweshwar Prasad Koirala, who studied and lived in India. The very next day after he took his oath, Vinay Mohan Kwatra, the Indian ambassador to Nepal, called on Deuba at his residence to congratulate him.

The eagerness of India, expected to be a $5 trillion economy by 2024, to cultivate ties with the new prime minister is quite obvious

In April, Deuba as an opposition leader backed a US$500 million infrastructure grant from the US foreign aid agency, the Millennium Challenge Corporation (MCC). It was termed as a direct counter to China’s big ticket Belt and Road Initiative, touted to be the world’s largest infrastructure project.

During his last stint as prime minister in 2017, Deuba rolled back a deal with China to set up a $2.5 billion hydroelectric project in Nepal which formed part of the Belt and Road Initiative. The project was revived by the subsequent administration.

The eagerness of India, expected to be a $5 trillion economy by 2024, to cultivate ties with the new prime minister is quite obvious. But Deuba has a Himalayan task ahead of him.

He was not elected by parliament but by the Supreme Court, which means passing crucial legislation will be a huge task for the five-member coalition government.

The Communist Party of Nepal is still the largest faction in the lower house and will try to strengthen its position before the general election next year.

If the coronavirus surges again in the country, Deuba’s popularity will take a beating due to a deteriorating economy.

India’s Foreign Ministry said in a statement that the two leaders are firm on strengthening cooperation and coordination. This even as China, a $16 trillion economy, keeps lurking to its north.

Oli had hosted Chinese President Xi Jinping on a state visit in 2019. Besides inking 18 agreements, Xi announced $493 million in aid to Nepal and both sides agreed on the $5.5 billion China-backed railway connecting Kathmandu to Lhasa in disputed Tibet.

In the wake of India’s economic blockade through the southern border in 2016, Oli managed to bring in China to the rescue. In 2018, Nepal inked the Transit and Transportation Agreement with China which allowed landlocked Nepal to use Chinese sea and ports for trade.

Oli had repeatedly targeted India, irking its leadership last year by republishing his country’s official map and incorporating disputed areas to its territory.

Deuba’s return to power does not mean an end to the country’s tryst with leftist regimes.

No matter who is in power, Nepal cannot attain prosperity without cooperation from both China and India.

The two big economies with 36 percent of the globe’s total population have been a constant for the Himalayan country along with its own endemic poverty and political instability.