Nepal's Madhesi have a mountain of prejudice to climb 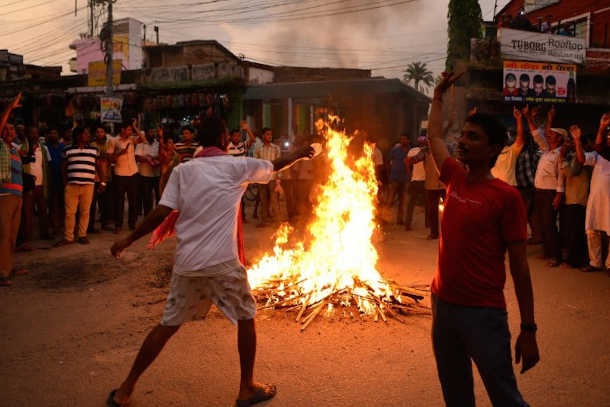 Nepalese Madhesi protesters, a marginalized group in the southern plains, chant slogans during a protest in Janakpur, some 300km south of Kathmandu, in this June 12, 2017 file photo. The protests came one month after Nepal began holdings its first elections in two decades. (Photo by Prakash Mathem/AFP)

People often think of Mount Everest or the Himalayas when the word Nepal is mentioned. But this little country offers much more.

They are mostly Indo-Aryan, Tibeto-Burman, and other indigenous-language-speaking groups, offering a total of 123 mother tongues and myriad cultures.

Managing such diversity amid an unstable government and a weak bureaucratic system is no mean feat.

This is especially the case as the country is restructuring, a continuation of the process that began after the Maoist insurgents signed a Comprehensive Peace Accord (CPA) with the government in 2006.

The Madhesi, a group with Indian ancestry that populates the Terai, face some daunting challenges against this backdrop.

Mark of the Madhesi

At the invitation of Nepal's former rulers, people have been migrating to the country from neighboring India since the late 18th century.

Many settled in the Terai belt, a region that has for many become synonymous with the Madhesi.

Another school of thought claims the region should be considered a sovereign state and separate entity from the rest of Nepal, as the British gifted it to the country in the 19th century. They refer to this area as Madhesh.

The Madhesi people are darker skinned than most of the hill dwellers in the country. The Buddha is said to have been born here, in the Buddhist pilgrimage site of Lumbini.

Roughly half of Nepal's 30-million population lives in the Terai. The Madhesi make up about 20 percent of the total population, with the notable exclusion of the Tharu people, who are native to Terai.

The Madhesi can be divided into several caste groups ranging from the Brahmin, or upper caste, to the "untouchable" Dalits and other linguistic groups like the Maithili, Bhojpuri and Awadhi.

Madhesh, as a political term, was first bandied about in the 1940s, with a political movement calling for regional autonomy emerging a few years later in 1951.

Since then, several political groups and movements have been actively calling for independence. This was before the Maoist insurgency, dubbed "the people's war," took over.

Back in 2007, I was among a group traveling to eastern Nepal by land through the Terai on the only highway that runs between the east and west of the country.

A journey that should have taken just one night ended up costing us five days as we became embroiled in a strike organized by the Tharu and Limbu people along different sections of the highway. Neither group considers itself Madhesi, and both were demanding autonomy and separate states.

Instead of holding peaceful demonstrations, they attacked buses using homemade explosive devices. Moreover, passengers were not allowed to stop at shops along the highway that first night to buy food or water.

Other ethnic and regional groups have carried out similar protest movements calling for an identity-based autonomous state.

Many historians agree the Madhesi agitation hit a peak that year, with hundreds dying in clashes with state forces.

In Nepal, the multiparty political movement was paralyzed for a while. It later mushroomed into parallel political groups based on their ethnicity and regionalism, after the Maoists had effectively encouraged them to become politicized.

For quite some time while a new constitution was being drawn up in the wake of the CPA, ethnic groups such as the Limbuwan, Khambuwan, Madhesi and Kochila shook the nation.

These newly formed political forces had some common demands: full adoption of proportional representation in the assembly based on the ethnic distribution of the population, and the establishment of mono-ethnic, autonomous federal states based on the principle of self-determination.

The nation was put on high alert, prompting a huge civilian-led gathering in Kathmandu in 2012 demanding the restoration of social harmony and national unity.

Anti-constitutional violence flared up again in the Madhesh in 2015, supported by an Indian blockade, while the rest of the region celebrated the promulgation of the new charter.

This further polarized regional politics, with the Madhesi becoming more emboldened under the motto "One Madhesh, One Pradesh [Province]" at a time when other groups were seeing their ethno-political concerns diluted.

Many people who hail from the hill tribes, myself included, view this as a communal issue pitting the people of the plains against those who live in the mountains.

To a degree, this way of thinking has been fueled by the belief that pro-Indian sentiment has long governed life in the Terai.

However, it is important to look at both sides of the coin to fully understand this complex web of regional politics.

I don't think the Madhesi's calls for independence emerged as a result of the Maoist insurgency alone. Rather, this was founded on a much deeper sense of discrimination felt by people living in the Terai, excluding the hill tribes.

They have always felt excluded from important decisions pertaining to their socio-economic and political rights as the local authorities have consistently been controlled by upper-caste Khas Brahmins and other groups.

Issues like citizenship and the recruitment of Madhesi into the state bureaucracy and security forces have been major concerns from the beginning of their political struggle.

Tragically, the long-awaited constitution failed to address these issues, including the prejudice the Madhesi suffer in public life.

Like many other children, I learned at an early age to refer to dark-skinned people from the Terai as Bhaiya, regardless of their age or whether they were Tharu, Muslim, Madhesi, or from another tribe.

It took me a long time to realize this was not a normal social marker, but a derogatory term when used in this way. It is worth explaining that the same word serves as an honorific or mark of respect in India, denoting an elder brother.

But in the context of the Terai it becomes discriminatory slang denoting a Hindi-speaking person from northern India, and is used to distinguish between the Terai and the hill tribes.

Some people refer to the Terai people as "Madhese" or "Dhoti," which to my mind is nothing less than hate speech. A dhoti is a traditional men's garment worn on the Indian subcontinent, and is popular among the Madhesi. Such usage of the word is considered discriminatory.

The hill tribes still consider the Madhesi as Indians, even though their forefathers put down roots in Nepal long ago. Despite this, they are robbed of many rights aligned with Nepali citizenship. For example, they struggle to have their offspring granted citizenship if they are born overseas, they are sorely under-represented in the bureaucracy and security forces, and they face opposition to mixed marriages.

Critics say the concerns of the Madhesi are not properly addressed at a national level due to certain conflicts of interest.

The regional parties that could theoretically fight on their behalf are too busy bickering with each other, which has made them weak. This paved the way and built momentum for the rise of separatist movements in the Terai.

The politics of violence can be likened to a poison that is slowly killing the nation. When "identity politics" takes over, people start to focus on that which drives them apart rather than that which binds them together.

As Nepalis, we must be careful never to underestimate the power of the phrase, "Unity in Diversity" — the official national motto of Indonesia that is also widely embraced and applied in Nepal.

The central authorities and the public in general should reconsider and soften their views of the people from the Terai, especially the Madhesi, so they can proudly boast of being citizens of Nepal from the land of the Buddha.