Nepal's fascination with its living goddess

The child is revered as 'caretaker' of the whole nation, including by heads of state, who visit successive living goddesses for blessings 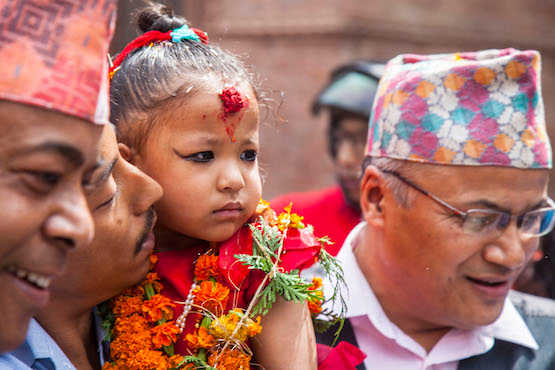 A three-year-old girl in Nepal has been anointed as a Kumari Devi (living goddess), an embodiment of the Hindu goddess Taleju.

She replaces a girl no longer eligible to be accorded divine status upon reaching puberty.

A crowd eagerly waited to see the new living goddess, as she was carried through Kathmandu's historic Durbar Square.

The child is revered as "caretaker" of the whole nation, including by heads of state, who visit successive living goddesses for blessings during special festivities.

"I feel blessed to get a rare glimpse of a new Goddess Kumari," said attendee Ratna Kaji Bajracharya.

"My family will be blessed by her divine power."

Her predecessor, Matina Shakya, 12, who was also bestowed with goddess status at the age of three, left the palace on a palanquin via a side door.

She wore an ornate red, living goddess costume and make-up that included a distinct "third eye" painted on her forehead.

Jesuit Father Gregory Sharkey, from the Kathmandu University Centre for Buddhist Studies, said there are many shared Buddhist and Hinduism traditions.

However, he added that the Kumari Devi rituals are essentially of Buddhist origin.

One king who lived one thousand years ago was allowed to play dice with the Goddess Taleju.

But one day she took offence when he commented on her beauty and she disappeared, which brought on a series of natural disasters.

Taleju agreed to come back only in the form of a child goddess so she would not be an object of sexual desire.

Choosing and revering a modern incarnation of Kumari Devi has been subjected to criticism over the removal of a small child from her family.

But Father Sharkey said that these days the selected girl was permitted to see her family and other children were allowed to visit.

She has a courtyard, and the situation is not as grim as sometimes presented to the outside world, he added.

Human rights activists, who were demanding the discontinuation of the living goddess tradition, filed a writ in Nepal’s Supreme Court in 2005.

However, supporters of the practice of Kumari Devi, along with former "living goddesses," said mistreatment allegations were based on false rumors.

The Supreme Court ruled that the "living goddess" should be educated with the help of tutors inside the palace and allowed to sit for exams.

Radha Paudel, a human rights activist objects to the concept behind the Kumari Devi tradition.

"Creating a goddess status for an innocent child and making people worship her in the name of religion is wrong," she said.