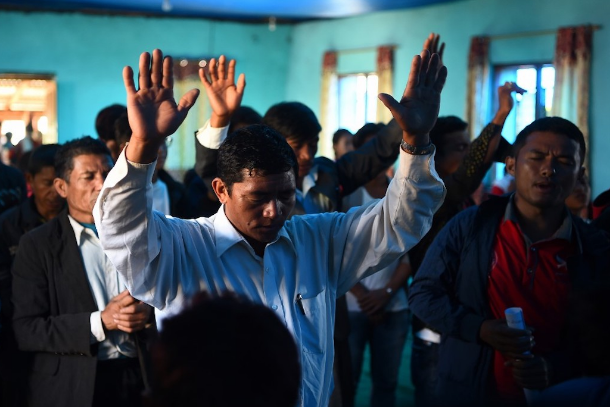 Nepali Christians take part in a church service in Lapa village of Dhading about 100km northwest of Kathmandu, in this Oct. 8, 2017 file photo. Despite strict laws that ban religious conversion, Christianity has spread rapidly over the last two decades in Nepal, where many see it as an escape from the deeply entrenched caste system. (Photo by Prakash Mathema/AFP)

A pastor accused of evangelizing in Sarlahi, a remote province in southern Nepal, was beaten by an angry mob on March 24 as religious minorities in the country face escalating levels of persecution.

Meanwhile, the organizer of a retreat held in Kathmandu Valley from April 11-13 had to change the venue at the last minute due to threats from Hindu extremists.

Another prayer service scheduled for April 13-14 at the Jesuit-run St. Xavier school in Patan, Nepal's third-biggest city, also changed venue after Hindu delegations reported the school was acting as a venue for proselytizing.

Proselytizing and religious conversion are still legally prohibited in Nepal, which began admitting foreign missionaries in the early 1950s but remains heavily committed to ensuring there are no threats to Hindus. Calls to dilute or scrap the law have been surfacing for years.

The incident at the school in Patan struck me as particularly discriminatory as, according to my knowledge, its grounds have been used by people of all castes and creeds for a full spectrum of public functions.

The situation deteriorated over Easter as the repercussions of the suicide bombings at several churches and luxury hotels in Sri Lanka some 2,300 kilometers away were quickly felt in Nepal.

In fact, a peaceful "resurrection rally" that had been organized nationwide on Easter Sunday was cut short after just an hour as news of the tragedy became known.

The aim of the rally was to allow people to express their happiness through music despite the difficulties they had faced in recent weeks.

Yet their difficulties didn't end there. On April 23, Pastor Dilliram Paudel, secretary general of the Nepal Christian Society (NCS), was arrested with four other Christians while they were eating breakfast at a hotel in Dang district in western Nepal.

The group, including an Indian and one American lady, had been invited by local churches to speak to a group of pastors that Tuesday.

However the invitation was of little consequence to local security forces: They were apprehended without any warrants issued, accused of forcing people to convert to Christianity, and forced to remain in police custody for about a week.

The American was sent to immigration police in Kathmandu to be deported, but was saved by the lobbying efforts of Church leaders and set free the following day. The rest of the group was finally released at 5:20 p.m. (local time) on April 29.

Such incidents remind me of the shocking scenes I witnessed in Kathmandu 15 years ago when religious intolerance spiked in the wake of the slaughter of 12 Nepali migrant workers in Iraq by Muslim terrorists.

It was unnerving to watch the aggressive nature of mobs in the capital as they wasted no time in attacking mosques, Muslim-run offices, and individual Muslims — all beyond the control of state security forces.

However, it was much appreciated when a group of religious leaders from different faiths marched together for peace in a bid to calm the crowds.

After all, there was no possible way that Nepali Muslims, whose families have been living here for the last five centuries, could have any connection to the killings in Iraq.

Later, I was saddened to see more attacks on Nepal's Christians, such as a priest being shot, a pastor being beaten, churches bombed, and several arson attacks. Such incidents are sadly still rife.

The situation should have changed with the advent of a new government, new laws, and a restructuring of various state mechanisms, but such dreams remain "pie in the sky" for the religious minorities in the country.

A growing feeling of religious nationalism has taken root in our communist-led, secular nation, with those who target Christians and champion Hinduism increasingly regarded as "true Nepalis."

Numerous videos have gone viral on social media condemning Christianity and calling on the public to support attacks on churches.

Some groups even took to the streets to counter the peaceful Christian rally last week that was organized to pressure the government to free Dilliram and other Christian believers from detention.

Such activities, despite going against the grain of Nepal's new constitution, can be seen as a threat to true Hinduism, which is supposed to pave the way to truth and justice based on peace and love.

Moreover, religion should never be interpreted in a way that causes one group of people to instigate violence against another.

It is not mainstream Nepali Christians who are "antagonizing" the situation, but rather a series of cults that have sprung up featuring their own doctrinal teachings and leaders who claim to be reincarnations of Christ.

They are especially active on the ground in Nepal, which has stoked fears of religious conversion and proselytizing.

These cults are infamous in Nepal for making their followers make mandatory offerings of 10 percent of their salaries. They also ask their followers to sell off their ancestral property to help fill their coffers.

In a more "quirky" (scary) aside, some request that men get sterilized while women abort fetuses, based on their belief that the "end of the world is nigh."

Given the existence of such groups, it is easy to see where the fears of the government and general public come from, as they see some foreign missionaries abusing their business visas to spread false (or real) gospels.

This gives religious extremists and nationalists an opportunity to organize act against the entire Christian community in Nepal.

Mainstream Christian churches have issued several press releases clarifying they have no ties with such cults, but their words have mostly fallen on deaf ears as the frequency of misbehavior by said cults is so high.

On April 24, the Nepal Christian Society, one of the biggest umbrella bodies of churches in Nepal, issued another statement expressing concern over the situation.

It was supported by dozens of Christian federations and district committees, some of which have met with government offices, human rights commissions, and other civil society organizations.

It stated awareness of certain aggressive activities being undertaken against religious minorities, especially Christians, on a national level. It also drew attention to how the government was feigning ignorance of the situation.

Christian communities are deeply saddened by what they consider to be the unfair imprisonment of individuals, possibly in a bid to curtail their religious beliefs.

Society has called on the government, various stakeholders, civil society organizations, and individual to act.

The act of criminalizing the religious and cultural activities of minority religions reflects how Christianity is still viewed by much of the public as a "foreign" religion.

But to ensure Nepal's reputation is not stained on a global level, it should respect its international commitments by ensuring people have the freedom to adopt, observance, and practice the belief or religion of their choosing.

This may require amendments to the charter and a redefinition of certain criminal acts.

The definition of secularism on the first page of the constitution is the first target of many seeking such progressive change.

In fact, the first clause of Article 26 states as a constitutionally enshrined right that people can profess, practice and protect the religion of their conviction.

This is in line with the spirit of the Universal Declaration on Human Rights, the International Covenant on Civil and Political Rights. However, the third clause of that article seems to contradict the first one as it bans conversion.

Either amending or removing articles 156 to 159 from the 2017 Criminal Code would be a good start, as they have the potential to spark conflict between religious communities.

Moreover, those articles go against the word and spirit of the international human rights instruments Nepal is a party to.

In Nepal, multicultural groups have been coexisting for centuries; no law should disturb such harmony.

The country lacks equal provisions to register and regulate religious properties, which further compromises the freedom of religious communities.

As a result, for any religious institutions registered under the Association Registration Act (1977), a new law needs to be formulated and monitored so they can conduct their religious activities without any hindrance.

This includes the management of funeral sites at a local level for all religious groups, according to their cultures and values.

Christians and other minorities should also have their festivals respected as public holidays, especially Christmas and Easter, as is the case for Hindus.