Nepal's battle against leprosy is far from over 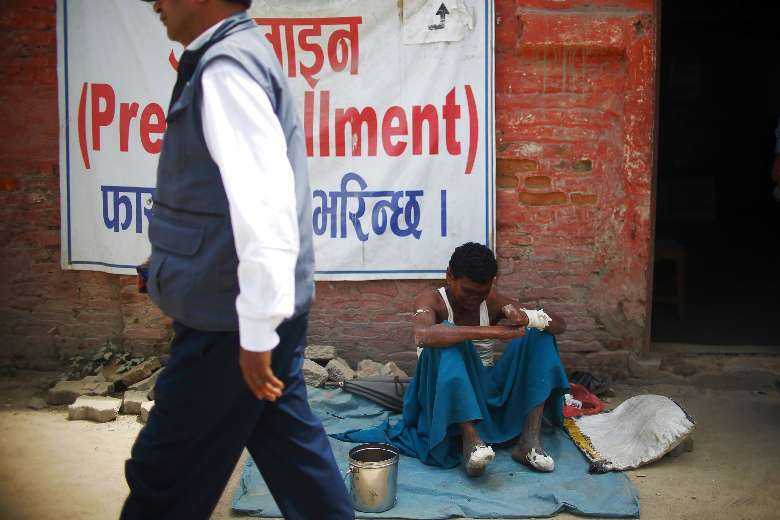 A leprosy patient who lost his hands and toes to the disease is seen begging on the streets of Kathmandu in Nepal in 2017. (Photo: AFP)

For decades, leprosy was considered an epidemic in Nepal. It changed in 2010 when the government declared the disease eliminated in the Himalayan country.

The 2009-10 data showed the prevalence of leprosy across Nepal dropped below one case per 10,000 of the population — the WHO benchmark for declaring that leprosy was no longer a public health problem.

It did not necessarily mean the country was leprosy-free. The reality was that in some areas, particularly in the north and in the hills, there was little or no leprosy, but in the southern Terai region there was still a lot of leprosy. This was partly due to larger concentrations of population and poverty in the south, which borders northern India.

After a period when leprosy levels stayed fairly steady, there has been an increase in the last few years, mirroring the same problem seen in India, where the government took its focus off leprosy after its "elimination."

Southern Nepal shares close cultural and economic ties with northern India due to the long and porous border between the countries. Poverty is rife across this region, with many Dalit communities having limited access to health services or any other services.

There has been a reawakening in Nepal in the last two years. The government health services, strongly supported by agencies like the Nepal Leprosy Trust (NLT), have renewed efforts to deal with the leprosy problem. This has resulted in a new national leprosy strategy being developed.

Leprosy is still very active in the poor communities in Province 2 of Nepal where the NLT is based. The province accounts for about 45 percent of Nepal’s new leprosy cases. About 10 percent of new cases are children and over 25 percent of the cases that the NLT diagnoses already have a disability resulting from the damage that leprosy causes if not detected early.

There is still much stigma attached to leprosy and a pervasive cultural fear of the disease and its effects. This often leads to the exclusion of patients from their families and communities.

The loss of the support networks of family and community is often devastating in extreme poverty conditions. The fear of being socially isolated prevents people from coming forward early for diagnosis and treatment. They try and hide their symptoms for as long as they can.

Leprosy is still therefore a significant player in undermining the health and development of poor communities in Nepal.

The NLT began working in Nepal in the 1970s, rehabilitating families who were living in the government leprosarium in Kokhana on the edge of the Kathmandu Valley.

Eileen Lodge, founder of the NLT, was able to resettle about 30 families in the Terai region on land granted by the government. The NLT provided training in agriculture and other support systems and the villages that grew as a result continue even today.

The NLT also established a technical school and craft workshops in Lalitpur, Kathmandu, employing the skills of people from Kokhana to train others and enable people affected by leprosy to become independent.

These workshops have continued for the last 40 years and sell cloth, felt and leather goods in Kathmandu and abroad. They still employ some people affected by leprosy as well as people disabled for other reasons.

The NLT’s main project, Lalgadh Leprosy Hospital and Services Center (LLHSC) in Dhanusha district in southeast Nepal, was established in the early 1990s to provide leprosy outpatient and inpatient referral services in an area where virtually none previously existed.

Despite official denials about the high prevalence of leprosy in the area, it transpired that the NLT founder was spot on — leprosy was more prevalent here than anywhere in Nepal.

About 40,000 cases of leprosy have been diagnosed since the center was established, but thousands more were treated for complications

The LLHSC since then has been one of the busiest centers in the world for leprosy, diagnosing 900 to 1,200 new cases each year and managing about 9,000 to 12,000 visits each year from leprosy patients.

Its facilities include ulcer and reaction care, medicine, reconstructive surgery to correct leprosy-induced deformities, prosthetics, special footwear, counseling, advocacy and training in self-care. All this treatment is free of charge.

About 40,000 cases of leprosy have been diagnosed since the center was established, but thousands more were treated for complications. Aside from leprosy, the LLHSC also provides low-cost health services.

The NLT recognized early on that unless attitudes in the community concerning leprosy were changed, a steady stream of new cases would continue. It became very active in the community in various ways to change minds about leprosy.

Street theater was one effective way and for some time the NLT had a dozen drama troupes traveling around the Terai villages creating awareness about leprosy. But funding dried up after the leprosy elimination declarations.

The second major initiative was the stigma elimination programme (STEP) started in 2002. It essentially empowered people affected by leprosy to organize themselves as self-help groups and improve their economic status with small income-generating projects.

The STEP initiative transformed village communities who began to respect the groups of leprosy-affected people as hard-working and valuable, contributing members of their community rather than as outcast human debris.

It has been a slow process building these groups, but there are now nearly 150 of them, with the oldest still functioning.

Village Alive, an offshoot of STEP that builds on successful self-help groups to carry their experience and skills into a village-wide transformation process, has also been quite successful in 14 mostly Dalit villages, impacting the lives of some 2,500 people so far.

Lack of resources still poses a major challenge in battling leprosy. Nepal is a poor country and very reliant on help from the international community in tackling health problems.

For a neglected tropical disease like leprosy, these resources are very small. The West has little idea of what it means to be affected by leprosy. As the disease in general only affects the poor, it is likely to remain off the radar.

Infrastructure is another problem in Nepal. It is weak and frequently damaged by natural disasters. Add to that the political confusion, oft-changing national policies and bureaucratic red tape. It is hard to maintain progress.

Cultural issues continue to play a big part at national and local levels along with the tremendous gulf between rich and poor in Nepal.

The NLT continues to work closely with the federal government and other non-government organizations to take the new national leprosy strategy forward.

The best way forward would be for the current cooperation between the players to continue and for the international donor community to recognize the very real need for more resources.

Mike Houghton is general manager of the Nepal Leprosy Trust, a UK-based Christian charity battling leprosy in Nepal since the 1970s. The views expressed in this article are those of the author and do not necessarily reflect the official editorial position of UCA News.