Hoping for a better future, Tak Kumari Khadga's family left their remote mountain village and moved to Sundardanda, a small hilltop village located near a road network and market area.

While Sundardanda may mean "beautiful hill" in Nepali, life in their new home was not easy for the family of six.

"The biggest challenge we encountered was the acute shortage of water for drinking and irrigation facilities," said Tak Kumari.

"The situation gets even worse during the dry season between November and February," she said.

When her family arrived at Sundardanda, the village was already suffering water stress due to its natural springs being dried out by expanding dry seasons.

"And when there were guests in our place, I had to fetch water five times a day. This left me with no time to do other work," Khadga added.

During the rainy season, June to September, the locals grow seasonal crops like buckwheat and maize. Because of a lack of adequate irrigation water, arable land was left unutilized during the dry season.

"For the most part of the time, we traveled outside the village, to Kathmandu to work as daily wagers to support our family," said Tula Bahadur Khadga, 43, Tuk Kumari's husband. 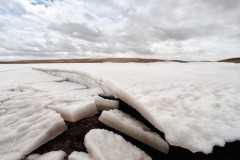 "The seasonal food crops we grew, would last for 5-6 months and then we were dependent on the money we earned working as a laborer to support our family," he said.

One of the reasons the remote areas in the hills have a high youth migration rate is the lack of livelihood options left in the village. In Sundardanda, almost 90 percent of the young people have left the village in search of work. It has been 16 years since the Khadga family moved to Sundardanda and over time the village has implemented measures to cope with water shortages. They have restored water catchments, constructed canals, and put in plastic ponds and installed water recharge tanks.

These measures have allowed many households to grow vegetables besides the regular seasonal crops, which has led to an increase in income for many households.

"The water is not adequate but it's not as scarce as it used to be in the past," Bajgain said.

The 47-year-old has lived in the village his entire life and he's witnessed changes in the area's climate, which he said became apparent from the early 1990s onward.

"The availability of water both for irrigation and drinking has been hit hardest," Bajgain said.

Water availability has become so scarce, he said, that some locals who discover a natural water source in their land are reluctant to share it while others sell it at high prices to a neighboring village in need.

Bhawani Dongol, a program manager from the World Wildlife Fund Nepal, said many districts like Sundardanda are facing water shortages due to the changing weather and rainfall patterns.

"Though the annual volume of rainfall has not changed significantly, the variation in timing and intensity has changed over the last two decades," said Dongol.

Experts say that the changing climatic pattern will further decrease groundwater levels during dry seasons while increasing the probability of life-threatening flash floods and inundation in the rainy season.

Bholanath Bajgain looks over a plastic pond that helps to irrigate his farm even during dry months. (Photo by Pragati Shahi)

Madhukar Upadhya, a watershed management expert, said the shortage of water has emerged as a key issue for many Nepalese.

More than 70 percent of the population depends on rain-fed agriculture, which contributes to 36.8 percent of the country's total gross domestic product.

"The availability of water is directly linked with the socio-economic development of the country," Upadhya said.

"Local farmers are at the front line of any impact from climate change," he said. "So, the intervention being carried out in some hilly villages with the construction of plastic ponds, recharge tanks and waste water management is praiseworthy and needs to be extended and made sustainable."

As the impacts of climate change are becoming more pronounced, various adaption programs have been implemented across the country.

One project titled "Strengthening adaptive small scale farming systems in rain-fed areas in Nepal, Bangladesh and India" has been operating since 2011.

Supported by the European Union, the project is being undertaken by Caritas Austria and other partners in South Asia, including Caritas Nepal. So far the project has helped 1,335 smallholder farmers adapt to changing climatic conditions.

"The project has not only provided a much-needed platform for farmers to voice their concerns in front of government bodies and concerned partners and find solutions, but it has also helped to improve food security among poor and underprivileged farmers," said Chintan Manandhar, the program's national project coordinator in Nepal.