Around 8,000 households still live under tents in poor living conditions 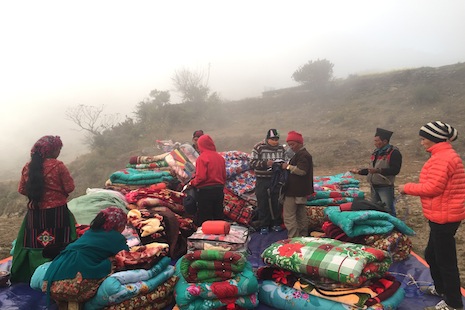 People from Yarsha village in Rasuwa district of Nepal look to buy warm clothes and bedding with the money they received from voluntary agencies. Many of them are braving the harsh winter in makeshift homes. (Photo by Pragati Shahi)

For Tuku Narayan Tamang, getting up at 3 a.m. on this particular day and trekking four kilometers from home was a necessity.

It was important that Tamang reach Bhorle, almost a day's walk from his village Yarsha in Rasuwa district of Nepal to receive a winter-related relief aid package.

Tamang, 32, is one of thousands who are still living inside tarpaulin shelters, eight months since a devastating earthquake rocked the Himalayan country on April 25.

The cold, icy winter is already threatening them, especially in the remote mountain areas where night temperatures often drop to freezing.

"We are having sleepless nights as we are struggling to keep our young children warm. There is no warm clothes to wear and mattress to sleep on," said Tamang, whose newly built house was destroyed by the earthquake.

Tamang had taken a US$4,000 loan to construct a house for his nine-member family and was in India to work as a daily laborer to pay back the loan when the earthquake struck.

"It was only the ninth day at work when I heard that my village was struck by an earthquake. I returned back immediately," Tamang said. When he reached home he found his new house in a heap of rubble, with grains and livestock buried underneath.

Fortunately, my family members were safe," he said. His family now resides in a nearby field under a makeshift tent barraged by cold winds sweeping from the mountains.

More than 95 percent of the houses were destroyed in Rasuwa, one of the most earthquake-affected districts.

Homeless most vulnerable in winter

Tamang's was among 110 households from Yarsha village identified as being most vulnerable and in immediate need of winter-related relief support.

"Our young children are suffering from cold-related ailments. They are not able to go to school and lack proper clothing to keep warm," said Yo Pasang Necor, 22, another villager from Yarsha who had come to collect relief aid.

Necor who has working as a migrant worker in Malaysia returned to his village after the earthquake killed his mother and left his 12-member family homeless.

The earthquake killed more than 9,000 people and left 600,000 homeless but government aid is slow due to political wrangling and unrest. Hence, around 8,000 households still live in temporary camps. A Nepalese villager with his package of warm clothes. Around 8,000 households still live in temporary camps amid a harsh winter. (Photo by Pragati Shahi)

Now, as winter progresses, there have been growing concerns over poor living conditions.

To counter winter-related risks, the government and some development partners have endorsed a decision to provide $100 to each family to help them buy warm clothes and blankets.

According to Lalit Thapa, a cash support officer with DanChurch Aid, most households in the three targeted districts of Rasuwa, Dhading and Sindupalchok, are in dire need of aid, with more than 60 percent unprepared for winter.

"So far over 800 households in these three districts have been supported with winter relief," he said.

Extending support for these most vulnerable families is Catholic Relief Services, Caritas Nepal and other local partners who have already started working for winter-related support in north Gorkha, the epicenter of the April earthquake.

Depending on the geographical terrain and remoteness of the area, each household will be provided either $140 or $100. CRS has targeted supporting 7,291 households in four districts of Lamjung, Gorkha, Dhading and Nuwakot.

On Dec. 17, Prime Minister K.P. Sharma Oli visited the earthquake-affected families in Gorkha, along with the distribution sites for winter set up by CRS and People in Need, a Czech relief agency.

However, despite such efforts, families are fearful of the lack of shelter and uncertain of the future.

"This is not enough to protect ourselves from the cold. We need proper shelter and without enough money and construction materials, we have not yet been able to rebuild our houses to keep our families safe," said Tamang.