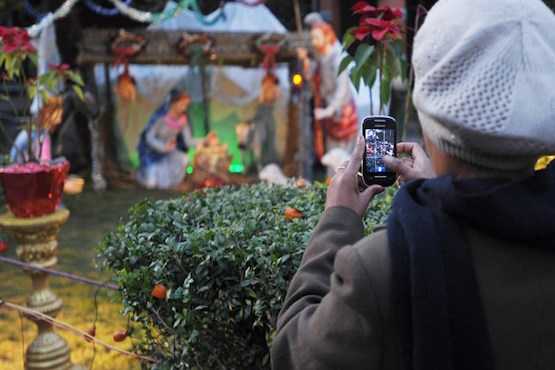 A 2011 file photo of a Nepalese Christian girl taking a picture of a nativity scene at the Catholic Assumption Church in Lalitpur during the lead up to Christmas Day. (Photo by AFP)

Nepal's decision to remove the religious holidays of minorities — including Christian ones — from the list of national holidays has been called deliberate discrimination.

"This is a deliberate attempt of the government to treat us [religious minorities] as second class citizens," said Reverend Tanka Subedi, co-chairperson of Nepal Christian Society and head of the Dharmik Chautari interfaith group.

Christmas Day had been observed as a national holiday in Nepal since 2008 but was left off the Ministry of Home Affairs' list of 52 public holidays released on April 1.

As a day off, Christmas Day is now applicable only to Christian civil servants.

"There are other important religious events celebrated by Christians, but we never demanded the government declare them as public holidays, except for Christmas Day," said Subedi.

"The new constitution established Nepal as a secular nation but instead of being treated in equal terms, the government has taken a regressive step," Subedi said.

The Interim Constitution 2007 declared Hindu-dominated Nepal a secular state that maintained neutrality in religious affairs. That was further established in the new constitution endorsed in September last year.

C.B. Gahatraj, chairperson of Federation on National Christian Nepal, said the government was not working to effectively implement the principles of secularism. "The government has hinted at curtailing the rights of religious minorities and trying to disturb communal harmony," said Gahatraj.

The Federation on National Christian Nepal issued a seven-day ultimatum April 3 for the government to amend its decision over the national holidays and to allow all individuals the freedom to practice their religious beliefs.

The federation has announced it will launch a hunger strike across the country if their demands are not met within that time frame.

It is also organizing a peace rally and its representatives want to meet political leaders so to apply further pressure to change the decision.

Similarly, a member of the Kirat religious group that belong to an indigenous religion with Hindu influence also expressed his dissatisfaction over the decision to limit one of their important festivals, Falgunanda Jayanti, for Kirat civil servants.

"This is against the decision taken by the government in December last year to declare Falgunanda Jayanti to be observed on November 10, 2016 as a national holiday," said Dekendra Singh Thegim, chairperson of the Kirat Federation.

Thegim said the government accommodates Hindu festivals and important dates, and has declared more national holidays to them.

"This shows that the state is still applying a discriminatory approach where religious minorities are concerned," he said. "The state should treat all religions equally once it is secular, but this is a challenge for now."

The new list of public holidays has fixed seven-day national holidays for Dashain and three days for Tihar, which are two major Hindu festivals.

According to the Ministry of Home Affairs spokesperson, Yadav Koirala, the country's lawmakers decided what public holidays would be national holidays.

"There has been concerns over the increased number of national holidays, and the government might have decided to cut down some and Christmas Day is one of them," said Koirala.

Regarding the Hindu festivals on the national holiday list, Koirala said these festivals have been observed for centuries and cannot be changed now.