Church officials have expressed concern over the rising numbers of refugees from Myanmar and internally displaced people within the country itself as highlighted in a recent UN report.

By the end of 2016, refugees from Myanmar rose to 490,300, up from 451,800 the previous year, making it the eighth largest refugee producing country in the world, said the UN's refugee agency in its annual global trends study released June 20.

Father Thomas Htang Shan Mong, director of Myanmar Catholic bishops' office for peace building and justice, blames a range of political and economic factors for the rise in refugees, as reported by the UN.

"There has been 70 nearly years of conflict and unrest in Myanmar, especially in ethnic areas," Father Mong told ucanews.com.

Bishop Pyone Cho of Pyay, in the diocese that covers the restive state of Rakhine agreed that decades-long oppression has forced thousands of people to flee his country.

"From a humanitarian perspective, people need to be protected and treated with dignity," Bishop Pyone Cho told ucanews.com. "The government has a responsibility to tackle the refugees issue," he said. 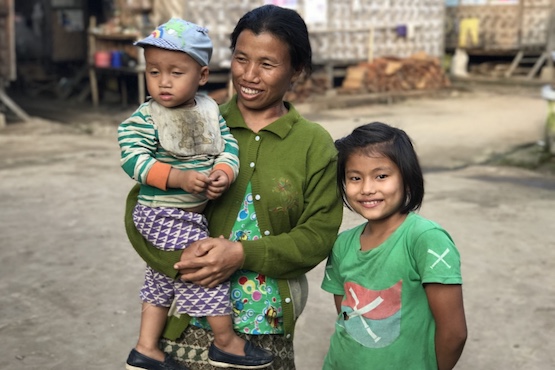 The UN report said there are more than 375,000 internally displaced people in Karen, Rakhine, Kachin and northern Shan states in Myanmar.

In Kachin and Shan states, more than 100,000 displaced people remain in camps since renewed fighting erupted between the military and the Kachin Independence Army in 2011.

Meanwhile, there are about 120,000 Rohingyas in camps for internally displaced people in Rakhine since 2012 due to violence between ethnic Rakhines who are Buddhists and Muslims.

Salin, a Rohingya from Maungdaw Township, northern Rakhine, said there is tight security in his area with soldiers and boarder guards patrolling Maungdaw town and nearby villages.

Salin said that around 30,000 Rohingya who fled to Bangladesh due to the military crackdown in October 2016 have returned to their respective villages.

"Some villagers' homes were burnt down by the military so the UNHCR is providing temporary shelters for those returnees," Salin, who works as a translator, told ucanews.com.

Since the 1970s, persecution in Rakhine State has forced tens of thousands of Rohingya to flee to neighboring Bangladesh.

In 1991, a large scale Rohingya exodus began and Caritas partnered with the Bangladeshi government to assist the refugees.

"For two to three years Caritas offered the refugees shelter, water, sanitation and health services," said James Gomes, regional director of Caritas Chittagong. "Later, we withdrew from the project as refugees outgrew our capacity and the government invited the UNHCR to work among them," he said.

Gomes said Caritas could no longer assist the Rohingya because it became — from the government's point of view — a politically sensitive issue.

While the Bangladeshis were relatively warm towards the refugees they have become stricter in recent years.

Since 2013, Bangladesh has sealed off its border with Myanmar and refused entry to boatloads of fleeing Rohingyas. It also banned three international aid groups — Doctors without Borders, Action Against Hunger and Muslim Aid UK — from operating among undocumented refugees in the Cox's Bazar area.

The situation worsened after a deadly Rohingya militant attack against Myanmar border police on Oct. 9 resulted in a crackdown in Rakhine by security forces, leaving about 600 dead, dozens of women raped and Rohingya villages razed. Some 75,000 Rohingyas fled to Bangladesh.

Currently, there are some 32,000 registered refugees residing in two official camps in Cox's Bazar. Hundreds of thousands more live in six overcrowded, informal camps nearby.

"When people flee their homes, they lose everything and it's saddening to see the number of such people, who live without human dignity and basic rights," Gomes told ucanews.com. "It's a shame that the international community fails to stop conflicts that force people to become refugees," he said.

The UN's report said that were 65.6 million displaced people worldwide in 2016, an increase of 300,000 from the previous year. The figure includes 22.5 million refugees, the highest number in modern history.