In 1971, the congregation adopted the elimination of racism as one of its four priorities The historic buildings on the motherhouse grounds of the Sisters of Charity of Nazareth, Kentucky, were "built by the hard labor of the enslaved men who made the bricks and laid them in place," said Sister Theresa Knabel, a member of the congregation.

"That these buildings are still standing is a tribute to their labor," she told participants in the "Walking Together: Pilgrimage for Racial Justice" on Oct. 16.

The event included a pilgrimage from the Cathedral of the Assumption to Presentation Academy, where the 150 or so participants listened to a panel of Sisters of Charity discuss their congregation's own pilgrimage -- from its early years as slaveholders to its efforts today for racial justice.

Sister Knabel began by describing the congregation's history, admitting aloud: "We were slave owners." It began with the founding of the order, she said.

In 1812, Bishop Benedict Joseph Flaget of the Diocese of Bardstown, Kentucky -- a predecessor to the archdiocese -- called on young women to help teach the (white) children of Catholic families who'd migrated from Maryland.

Some of the women who responded to that call brought enslaved individuals or families with them, she said.

It was the bishop or priest who made the purchase for us ... because, since we were women, we weren't allowed to own property

The number of slaves owned by the sisters varied through the years; by 1865, when the state of Kentucky started emancipating slaves, about 30 people were enslaved at Nazareth, she said.

"It was the bishop or priest who made the purchase for us ... because, since we were women, we weren't allowed to own property."

The church required that husbands and wives be bought or sold together. As a result, historical records show enslaved married couples living in Nazareth. Others married and lived out their lives in Nazareth, giving birth to children who were baptized there. 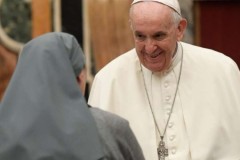 Though the state of Kentucky didn't recognize the marriage of slaves at the time, Catholic priests would celebrate these weddings in the church on the motherhouse campus, said Sister Knabel.

Baptisms and weddings were considered "special occasions," she said. The sisters also built a social hall to give the slaves a place to gather.

Despite the attention given to slaves by the sisters, Sister Knabel noted that slavery is "an institution of cruelty and some of that cruelty may have seeped into Nazareth."

She said 11 men worked the large farm under the watchful eyes of an overseer. Historical records show that in 1862 Nazareth needed a new overseer. The documents related to that hire stated they needed someone to "control Blacks."

"I'll leave that to your imagination," Sister Knabel told her listeners, which included students, parishioners and Catholic school educators.

Sister Adeline Fehribach, one of the vice presidents of the Sisters of Charity of Nazareth, also addressed the pilgrims during the event.

"We lament our participation in slavery and nothing can truly undo the harm that was done by it," she said.

Sister Fehribach described the sisters' outreach to African Americans starting in 1871, when members of the congregation became teachers at St. Monica School in Bardstown and St. Augustine School in Louisville. Both parishes are traditionally African American.

The sisters also have served in pastoral ministry in African American churches and provided social outreach through agencies such as Catholic Charities of Louisville's Sister Visitor Center, which provides emergency assistance to those in need.

Currently, Sister Paris Slapikas, a Sister of Charity of Nazareth, is the center's director.

In 1971, the congregation adopted the "elimination of racism" as one of its four priorities, said Sister Fehribach.

Reparations don't mean you have to come out of your pocket and put money on the table ... Education is the key, the key to economic success

The sisters also have made monetary contributions to the community in the form of scholarship funds and grants.

In June, the sisters announced a $2.5 million gift to the Louisville Urban League designated for the renovation of vacant and abandoned properties into affordable housing in West Louisville.

Sister Julie Driscoll also shared with the gathering the ways the congregation has used its voice to advocate for change on issues affecting the African American community, including voting rights, gun violence, the death penalty and reparations.

During a question-and-answer session following the sisters' presentation, Kim Telesford-Mapp, a member of St. Martin de Porres Church, questioned the congregation's decision to make a $2.5 million gift to the Louisville Urban League instead of to an agency such as the Catholic Enrichment Center, which is part of the Archdiocese of Louisville's Office of Multicultural Ministry.

It provides enrichment and outreach programs to the West Louisville community. The center also provides after-school tutoring and access to a computer lab, which Telesford-Mapp described as "woefully underfunded."

"Reparations don't mean you have to come out of your pocket and put money on the table ... Education is the key, the key to economic success. That's a great place to start. One thing we're looking at, is trying to get a Catholic school back into the West End," said Telesford-Mapp, drawing hearty applause from the gathering.

Sister Knabel thanked Telesford-Mapp for voicing her concerns and invited the community to keep reaching out. "We need to learn" how best to serve the African American community, she said.