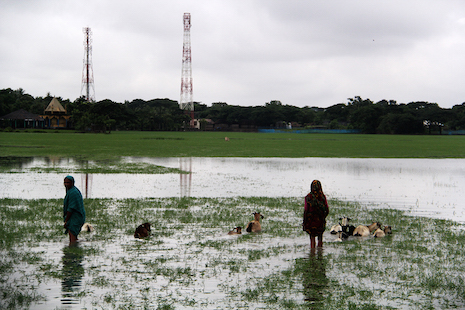 Bangladeshi Catholics should collaborate with social, political and faith leaders to take action on climate change at the grassroots level, church officials say.

Inspired by Pope Francis' encyclical on the environment, Laudato si', Catholic priests, religious, teachers and social activists from seven dioceses in Bangladesh met at a workshop held in Dhaka on Oct. 27.

"We can't do much on our own for climate change because our resources are limited," explained Bishop Gervas Rozario of Rajshahi, chairman of the bishops' conference's Justice and Peace Commission, which staged the meeting.

"So we are promoting awareness among our faithful, and encouraging them to reach and engage with people at various levels in their respective communities for climate change dialogue and action."

Bishop Rozario, who is also president of Caritas Bangladesh, the church's social services agency, said the world is "facing disaster."

"Yet we can save the world if we can take care of our planet as mother and sister, as Pope Francis has suggested," the bishop said.

Climate scientists see Bangladesh as particularly vulnerable to the effects of climate change. The country sits amid the world's largest river delta system and is crisscrossed by more than 300 rivers that empty into the Bay of Bengal. Most of the country lies on flat land only a few meters above sea level, making it vulnerable to natural disasters.

Climate analysts fear that vast areas of Bangladesh's coastline could vanish as sea levels rise — one of the commonly predicted consequences of a warming planet.

It's not just a matter of preparedness for future events. Climate change is already taking a heavy toll on rural communities in Bangladesh, said Francis Atul Sarkar, assistant executive director at Caritas Bangladesh.

"God forgives people and people forgive each other. Nature doesn't forgive us for our mistakes," Sarkar said. "We have been experiencing a diabolic, disastrous turnaround in nature because of human greed and irresponsibility."

In southern coastal areas, flooding and tidal surges are more frequent than ever, forcing people to become climate refugees. Unprecedented heavy flooding in Bandarban hill district, in the country's southeast, has made agricultural lands uncultivable for at least 50 years. In the northern region, rainfall has been delayed for two weeks, drastically impacting food production, Sarkar noted.

The pope's call for climate change action is both an eye-opener and an opportunity, said Oblate Father Deepak Costa, the head of a Catholic school, who attended the meeting.

"The church has many educational institutes across the country and they have a strong influence on local communities. So, it gives us an opportunity to engage in dialogue and action with more people for climate change," the priest said.