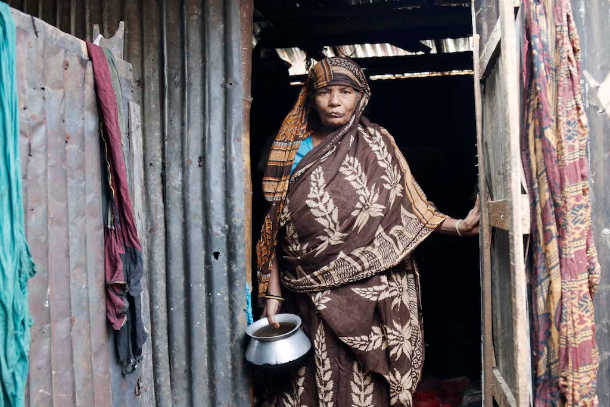 Nurjahan, 60, a Muslim slum dweller in Dhaka, migrated to the Bangladeshi capital with her family 40 years ago from southern Bangladesh after river erosion swallowed their home and arable land. (Photo by Stephan Uttom/ucanews.com)

A life full of struggles has not deterred 60-year-old Nurjahan, a Muslim widow and slum dweller in Bangladeshi capital Dhaka.

To her neighbors, Nurjahan is popularly known as the kolawali (banana seller). Every day she collects ripe bananas from a nearby market and sells them to customers in the slum to make ends meet.

“The traders at the wholesale market know that I am poor and helpless, so they don’t take money when I buy bananas from them. I return them the amount when I finish selling the bananas,” Nurjahan told ucanews.com at the Duaripara slum in the Mirpur area.

Some 40 years ago, Nurjahan and her husband left their village in Banaripara in Barishal district and moved to Dhaka.

“River erosion had swallowed our home and arable land. We decided to migrate to Dhaka for a better life and have lived in slums since then,” she recalled.

In Dhaka, her husband became a rickshaw puller and an occasional banana seller to take care of the family of four including two daughters.

Nurjahan’s husband died four years ago and her daughters live with their husbands’ families, meaning Nurjahan has to fend for herself.

Although state-run social safety net schemes exist for vulnerable and poor women like Nurjahan, including elderly and widow allowances, she gets none of them. “I don’t know how to avail these benefits — no one has ever helped me,” she said.

In 2016, she learned about the Support Assisting Improved Living (SAIL) project run by Catholic charity Caritas Dhaka that seeks to improve the living conditions of people in the city’s three major slums.

Caritas support helped her set up a better house made of corrugated iron sheets, bamboo and cement that cost 40,000 taka (US$471).

The project also enables her to get free medical check-ups, medicines, water, sanitation and hygiene tools every month.

“Sometimes I feel I should go back to my village but then I think again. We have no property left there and the relatives of my husband’s family are not positive. It means I have to stay here as long as I live,” Nurjahan said. Muslim mother and slum dweller Nipa Begum, 24, moved to Dhaka about 10 years ago to find a job and support her poor family in southern Bangladesh. (Photo by Stephan Uttom/ucanews.com)

Like Nurjahan, Nipa Begum hails from Barishal district and lives in the Duaripara slum.

“I saw our home washed away and rebuilt nine times due to river erosion. I decided to move to Dhaka about 10 years ago,” said 24-year-old Nipa, a mother of a three-year-old son.

After getting a job as a sewing operator in a garment factory, she married a colleague about eight years ago.

“During the birth of my son I had some complications in my ovary. I have not been able to work since then. My husband is the only breadwinner for the family,” she said.

Since 2017, Nipa has also benefited from the SAIL project, getting free treatment and medicines every month. Her son attends a day-care center run by Caritas, where he gets free basic education and entertainment.

Dhaka, Bangladesh’s largest city and one of the world’s most densely populated places, is home to more than 15 million residents crammed into about 306 square kilometers.

About 60 percent of the capital’s residents live in shantytowns, according to the Dhaka-based Association for Realization of Basic Needs, a development group focused on urban slum dwellers.

Most slum dwellers are climate refugees from the southern and northern parts of Bangladesh.

“Climate change-induced natural disasters like cyclones, flooding and river erosion spark the migration of millions from rural areas to urban areas after losing their homes and livelihoods. They dream of a better life in the cities but in fact they live in extreme poverty without any guarantee of basic needs,” Prof. Tasneem Siddiqui, founding chairwoman of the refugee and migratory movement unit at Dhaka University, told ucanews.com.

Every year Dhaka receives about 70 percent of the inbound migration flow from rural areas while Chittagong, a port city in the southeast, takes about 10 percent.

Since Bangladesh won independence from Pakistan in 1971, development and prosperity have been limited to a handful of cities that have constantly attracted people seeking better prospects in life, Siddiqui said.

“Apart from climate change, poverty is a major driving factor behind internal migration. There are few livelihood opportunities in rural areas apart from traditional farming, fishing and small businesses. If development was decentralized, I think the situation in Dhaka could never be like this,” she said. A child plays in the narrow alley of the Duaripara slum. (Photo by Stephan Uttom/ucanews.com)

Bangladesh is a Muslim-majority nation of more than 160 million in an area of 147,570 square kilometers, making it the world’s eighth most populous country. About 75 percent of the population live in rural areas.

According to the World Bank, about a quarter of the population earn less than US$2 per day and live in extreme poverty, making it one of the poorest countries in the world.

Bangladesh is located on the flood plains of world’s largest river delta system and crisscrossed by more than 300 rivers that empty into the Bay of Bengal, making it vulnerable to natural disasters. Most of the country lies on flat land only a few meters above sea level.

According to the International Migration Monitoring Center, over the last decade 700,000 people have been displaced every year on average in Bangladesh due to natural disasters.

Climate analysts fear that by 2050 vast areas of Bangladesh’s coastline will vanish as sea levels rise and some 20 million will be displaced — one of the commonly predicted consequences of a warming planet.

“More climate change impacts mean more migrations to Dhaka, a city already on the verge of collapsing. The situation will get worse if this continues,” Siddiqui warned.