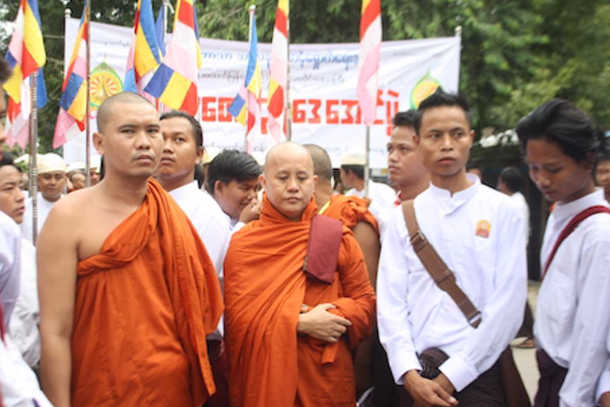 Ashin Wirathu, an influential hard-line monk from Myanmar's Ma Ba Tha movement, is seen during a rally supporting the legislation of race and religion laws in Mandalay in September 2015. (Photo by John Zaw/ucanews.com)

A government-appointed body that regulates Myanmar's Buddhist clergy has again banned an ultranationalist organization known for its anti-Muslim rhetoric, ordering it to remove its posters and signboards or face punishment under both Buddhist and secular law.

Ma Ba Tha was also banned in May 2017 but it rebranded and continued operating.

"The group has no clear goals and it spreads hate speech that fuels anti-Muslim sentiment in the country. In a transition to democracy, its ways and activities are a barrier for the government to move forward, so the government needs to take action," Ariya Wuntha told ucanews.com.

The monk said the nationalist group's activities were affecting all monks across Myanmar.

The Buddha Dhamma Parahita Foundation said in a statement on July 21 that the organization was seeking suggestions from branches across the country about whether to end its activities and remove signboards.

"If there is disunity among the monks and violence may erupt in the country, it is the responsibility of the State Sangha and the religious ministry," it warned.

Kyaw Nyein, secretary of the Ulama Islamic Organization in Yangon, said the ban is a welcome move but the order needs to be effective.

"In terms of legal perspectives, challenges lie ahead as legal experts and local administrators under the Ministry of Home Affairs don't dare to take action on the unruly monks. So I think civil society needs to play a role in pushing for effective action," Kyaw Nyein, who is also a lawyer, told ucanews.com.

After being banned in May 2017, the group's central executive committee came up with the name change and its logo, mission and activities have been unchanged. However, it continued to use its old name of Ma Ba Tha in Karen State and Mandalay Division.

Ma Ba Tha spearheaded much of the anti-Muslim rhetoric that has fueled sectarian conflict in the country, particularly in western Rakhine State. Violence there in 2012 left more than 200 people dead and forced tens of thousands — mostly Rohingya Muslims — to flee their homes.

Ma Ba Tha was established in 2013 and was influential in lobbying for a raft of so-called race and religion laws that were passed by a military-backed government before the 2015 election.

Ma Ba Tha was a strong supporter of the previous military-backed regime under president Thein Sein whose political party was trounced in the 2015 elections by Aung San Suu Kyi's National League for Democracy.