With the stage set for elections in five Indian states including the bellwether Uttar Pradesh, the love-hate relationship that frames India's religious communities is bound to figure in political discourse once again.

The elections — scheduled over the next two months — will also predict the political future of Prime Minister Narendra Modi and his pro-Hindu Bharatiya Janata Party (BJP) which came to power two years ago riding on a wave of anti-Muslim rhetoric, along with the "neo development model." Even a substantial number of Muslims are reported to have voted for Modi in 2014 especially in Gujarat, Bihar and Uttar Pradesh.

While Modi's home state of Gujarat, where he was chief minister for three terms, is more often called a Hindu laboratory, perceived Hindu-Muslim polarization is not confined to this western Indian state.

Uttar Pradesh, which goes to the polls in seven phases in February and March, has actually witnessed more Hindu-Muslim clashes than Gujarat, both in the pre-independence era and also in contemporary settings.

After all, much of the politically-linked temple campaigns aiming to undo "Muslim rulers' destruction of Hindu temples" revolved around temples in that state and that helped propel the BJP to the mainstream.

The same Hindu-Muslim disunity factor would also come into the political debate in the state of Uttarakhand where so-called ‘Muslim appeasement' by the BJP's rival, Indian National Congress has already made news in the run up to the polls.

The Congress-led state government's decision to give "special noon breaks" to Muslims to perform Friday prayers has provoked angry reactions from the BJP. "What if the Hindu community says they need a two-hour break on Monday for Shiv puja, on Tuesday for Hanumanji and on Sunday for the Sun God?" BJP spokesperson Nalin Kohli said.

The state that witnessed devastating floods in 2013 is also famous for Hindu pilgrimages and shrines. How these issues will influence polls remains to be seen.

Amidst these debates, many political watchers are taking an overall caustic view of the Hindu-Muslim relationship. "The Hindu-Muslim permutation and combination in politics as seen in the last 20 years often sparks off rows about whether the two communities have been nurtured by a single civilization or two distinctly different civilizations," says Kolkata-based educationist, Chiranjeet Shanyal.

While all eyes will be on the Uttar Pradesh polls, as this happens to be India's most populous state, the issues concerning other minorities, like Sikhs, will be in play in the northern state of Punjab where Sikh followers are a majority. For Christians, the electoral games will be crucial in the states of Goa and Manipur.

The Christian community in Goa has been curiously sharing a love-hate relationship with the BJP for different reasons at different times and in different situations. In Goa, just as in Manipur, an interesting political campaign remains to unfold.

The BJP is banking on the support of local Meitei Hindus for its fortunes in Manipur that borders Myanmar. The rival Congress has a strong Meitei leader in the form of incumbent Chief Minister O. Ibobi Singh, who is known for his crafty moves to get Meitei Hindu voters to favor him.

The state also has a substantial Naga tribe, most of them Christians, who are largely perceived to be soft towards the BJP. "The Nagas could be inclined to support the BJP or its ally, the Naga People's Front primarily because the Modi government has entered into an agreement with The National Socialist Council of Nagaland. Moreover, Ibobi Singh of Congress has relentlessly pursued anti-Naga policies during the last decade," said L. Siro from the United Naga Council.

Ibobi Singh has created new administrative districts to reach out to another section of the Christian population in Manipur: the Kukis. The division of Christian voters could spoil Modi's ambitions in Manipur.

In Goa, the BJP won the support of Christians in 2012, helping them ultimately to provide six Christian legislators. They even have a Christian as the deputy chief minister: Francis D'Souza.

"I was asked if there can be a Christian chief minister for Goa in the future. I said it is possible," D'Souza told a press conference in Panaji.

But it is a fact that the BJP has lost the good will of Goan Christians for several reasons, including reported attacks on churches in various parts of India after the Modi government took power in Delhi.

"In Goa, the people and Christians in particular saw the BJP as a viable alternative in 2012. But 2017 will be different," says Manish Tewari, Congress leader.

In a democracy, the election process throws up opportunities for sizing up the polity. It does a reality check. The parameters of this check will differ greatly in each state's vote. But these are first acid tests for the popularity of Modi's programs and policies. 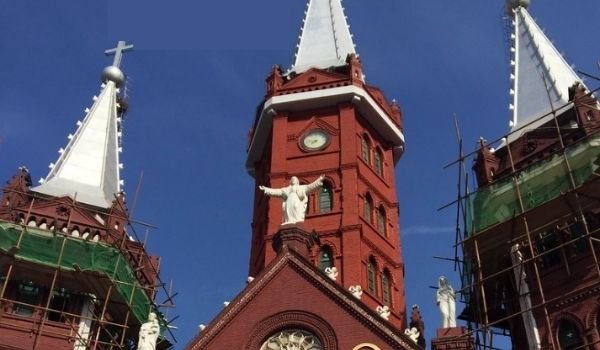