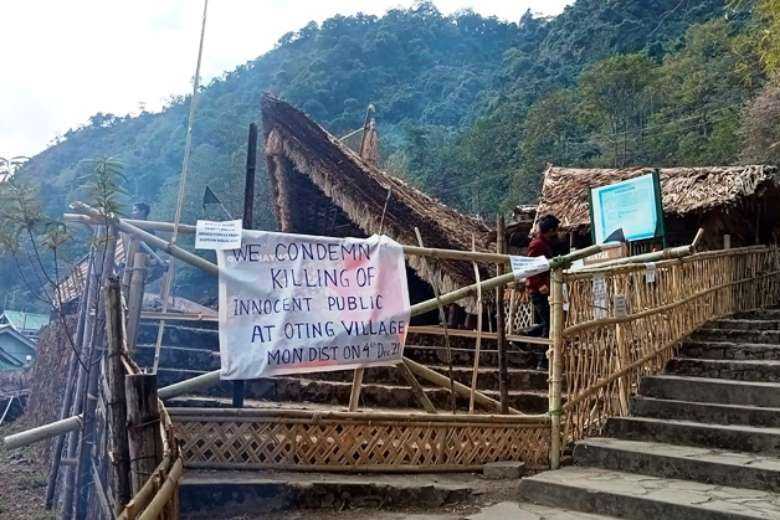 A placard at the venue of the Hornbill festival, which was shut in protest after Indian security forces killed civilians in the northeastern state of Nagaland, at Kisama village in Kohima on Dec. 5. (Photo: AFP)

At least 15 civilians and a soldier were killed in Christian-dominated Nagaland state in India’s northeast region in a botched military operation that led to retaliatory riots by angry locals.

On Dec. 4, a special army unit opened fire at a pickup van carrying coal miners to their village, reportedly mistaking them for armed insurgents. Six were killed on the spot while seven more civilians and a soldier reportedly died when angry locals clashed with the men from Assam Rifles, leaving many injured.

“The first assault by security forces on Dec. 4 was due to mistaken identity as there were inputs of movement of insurgents from a militant group known to be based out of Myanmar,” a senior security official in New Delhi told UCA News.

Protests erupted across Nagaland on Dec. 5 with angry mobs vandalizing an army camp in Mon district, where the incident occurred. Media reports said a riot-like situation prevailed as locals retaliated by targeting army vehicles, setting some on fire.

Federal Home Minister Amit Shah said he was “anguished” by the ambush blunder, and promised to investigate the incident with a high-level special investigation team (SIT) and ensure justice to the bereaved families, reported The Hindu newspaper.

The incident could jeopardize the peace talks between the federal government headed by Prime Minister Narendra Modi and Naga groups that are in the final stage, having begun in 1997.

The Naga National Political Groups (NNPG), an umbrella organization of seven militant outfits involved in negotiating peace with the government, said the killings of innocent people “can drive the Nagas further away from India.”

“The destructive Indian army tactics and actions in Naga homeland have belittled the political commitment of the Indian prime minister and home minister,” the NNPG said.

The influential Naga Students' Federation (NSF) called a six-hour shutdown from Dec. 6 morning and five days of mourning, urging all Nagas in the state and outside to avoid any merry-making and festivities ahead of Christmas.

The protest is a “symbolic expression of resentment towards the government that has failed to protect its own people,” the NSF said in a statement.

The main opposition party, Congress, flayed both the provincial government and the federal dispensation in New Delhi.

“The government of India and security forces have prejudged all Nagas as enemies of the nation. Only such a prejudiced mindset could pull the trigger,” said Kewekhape Therie, Congress leader and a former state minister.

He said the massacre of innocent villagers was “not only highhandedness by the Assam Rifles but a gross mishandling of the security forces by the Bharatiya Janata Party (BJP) government at the center and its alliance government in the state.”

“Nagas were waiting for a Christmas gift, expecting peace and solution to the decades-old insurgency issue. Instead, so many innocent lives were lost,” said Kohima-based educationist Kenny Angami.

Some Naga leaders did not rule out the “revenge angle” in what they described as a “vicious cycle” of armed insurgency and counter military operations.

“The incident could have been due to mistaken identity or a case of revenge for the recent killing of Colonel Viplav Tripathi, his wife and nine-year-old son, along with four soldiers, allegedly by Naga militants in Churachandpur district of neighboring Manipur state,” said a Naga politician on condition of anonymity.

Baptist leader Ovung Lotha said: “It is sad that such a thing should happen. Human beings are always prone to taking revenge. The killing of the colonel and his family was an ugly episode.”

The AFSPA enforced in Nagaland in 1956 has always allowed cowards within the Indian military to take inhuman, disastrous decisions at critical political and historical moments

Nagaland has been home to the oldest insurgency in northeast India with multiple guerrilla groups still operating from their hideouts in jungles bordering Myanmar. Some Naga groups including the Konyak tribes even share ethnicity and brotherhood with some groups in Myanmar.

“The latest incident is a reminder of what our people have faced for years,” he said.

In July 2021, opposition leaders had written to President Ram Nath Kovind requesting him to withdraw the AFSPA along with other “black laws” like the Unlawful Activities (Prevention) Act (UAPA), the National Security Act (NSA) and the Public Safety Act (PSA).

This was in the aftermath of the custodial death of Jesuit Father Stan Swamy, who was arrested under the draconian provisions of the UAPA.

“The Naga people have been demanding withdrawal of AFSPA for decades now. I fail to understand why it should continue when peace negotiations between Naga groups and the government of India are underway,” said Y.Z. Ovung of the Lotha Baptist Church in Dimapur said.

“The AFSPA enforced in Nagaland in 1956 has always allowed cowards within the Indian military to take inhuman, disastrous decisions at critical political and historical moments,” the NNPGs alleged, hinting at further delays in a peaceful solution to the Naga issue.