Despite being fined under assembly law, Catholic woman says she will continue to oppose China-backed Myanmar project 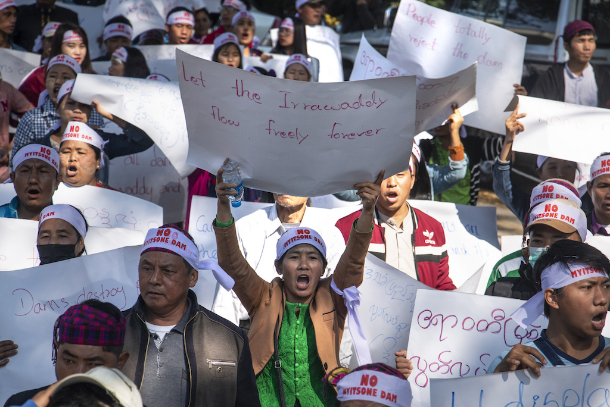 Myanmar demonstrators demand the government permanently stop construction of the Myitsone Dam in a protest in Myitkyina, capital of Kachin State, on Feb. 7. The project was halted by Myanmar in 2011 over environmental concerns. (Photo by Zau Ring Hpra/AFP)

A court in Myanmar’s Kachin State has fined a Catholic woman who organized a protest against the Myitsone Dam project for violating the peaceful assembly law.

Bernadette Ja Hkawng was fined 10,000 kyats (US$6.50) on Feb. 11 after using a loudspeaker and unauthorized slogans such as “No Myitsone Dam” in a Feb. 7 protest.

“I work for the people not only in Kachin but also across the country, so I am ready to face any challenge,” Ja Hkawng told ucanews.com.

She has called on all people in Myanmar to join hands to protect the Irrawaddy River and halt the Chinese-backed dam project permanently.

“I will not give up my fight against the dam in Kachin State,” said Ja Hkawng, who was forced to make way for the megaproject and leave her Tangphre village and relocate in 2010.

On Feb. 8, police in Myitkyina, the capital of Kachin, filed a lawsuit against the protest leader under section 20 of the peaceful assembly and procession law for using unauthorized slogans and a loudspeaker.

Under the law, organizers must inform police in advance of any protest and its location, time frame and intention. They also need to provide details of any slogans to be displayed and the personal information of anyone planning to speak.

Catholic priests and nuns joined more than 6,000 people including interfaith leaders, politicians and activists on a march in Myitkyina to call for a complete halt to the dam project.

Protesters wore headbands reading “No Myitsone Dam” and held placards written in English, Burmese and Chinese that read “No dam on the Irrawaddy River, the lifeblood of Myanmar,” “Let the Irrawaddy flow freely forever” and “Let the displaced go back home.” “No matter if we face lawsuits or any difficulty, we have no fear as we are determined to keep fighting to halt the dam project permanently,” Lu Ra, an ethnic Kachin Baptist, told ucanews.com.

Much to the displeasure of China, the military-backed government of then president Thein Sein suspended construction in September 2011.

Most of the electricity produced by the US$3.8 billion project would go to neighboring China.

Renewed concerns over the project follow a December visit by Chinese ambassador Hong Liang to Kachin State where he met with political parties and social organizations.

Two weeks after the meeting, China's embassy in Yangon released a statement saying the Kachin community were not against the project but some outside individuals and social organizations were. The claim was disputed by a Catholic Kachin leader.

Cardinal Charles Maung Bo of Yangon has appealed to all stakeholders to stop the dam project as it is an “environmental disaster” and a “death sentence” to the people of Myanmar.