Religion and politics collide in run-up to November elections 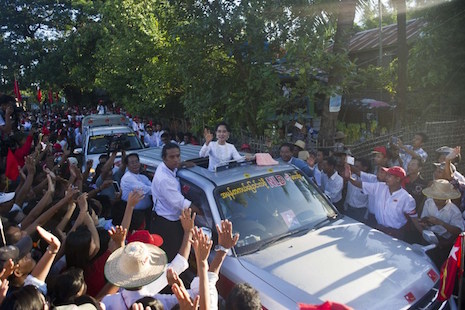 The region has been the epicenter of the Buddhist-Muslim sectarian violence that has peppered the country in recent years. Some political observers have questioned how dangerous it might be to take her campaign to the restive state ahead of Nov. 8 elections.

During a campaign stop Oct. 16, Suu Kyi was asked directly whether a win by her National League for Democracy Party in November will see more Muslims come into Myanmar — a racially charged message being spread around the divided country with the help of influential hard-line Buddhist monks. She responded vehemently.

Myanmar's constitution prohibits the use of religion for political purposes, Suu Kyi told tens of thousands of supporters, who were decked out in the party's signature red and white colors.

"People should know this is illegal," she said. "Why isn't the government taking action against people who spread this message?"

Her comment alluded to widespread rumors that the ruling party, the military-backed Union Solidarity and Development Party, is backing the actions of the Ma Ba Tha movement — a Buddhist nationalist group led by outspoken monks. Wirathu, the group's most influential monk, has publicly thrown his support behind President Thein Sein.

Suu Kyi faced down the accusation, which was asked three separate times during a speech on the first day of an Oct. 16-18 swing through Rakhine state.

The rest of the address was a version of her standard stump speech, which focused on not fearing change, increasing economic opportunity and making wealth distribution more fair.

"Only a handful of people in country are rich. The majority of people are still impoverished," Suu Kyi told the cheering crowd.

She added that Rakhine, on Myanmar's western coast, is rich with natural resources but the people in the state were still poor, "so something is wrong." Myanmar escalates pressure on activists ahead of elections Still, despite now being forced take on hard-line Buddhist elements, Suu Kyi has avoided the northern part of the state and its capital, Sittwe, where about 140,000 Muslim Rohingya people remain trapped in cramped refugee camps in conditions critics have likened to apartheid.

Instead, the opposition leader planned a weekend swing through three townships in the south of the state, beginning in rural Taunggok on Oct 16, where she drew a substantial crowd.

It was in Kyauknimaw village where in 2012, a Rakhine Buddhist girl was raped — allegedly by three Muslim men. This triggered further violence, when a mob lynched 10 Muslim pilgrims in Taunggok, a Buddhist stronghold where locals say there have been no Muslim residents for decades.

Win Naing, a candidate for state parliament with Suu Kyi's party, said he believed the National League for Democracy had a strong chance of winning all 24 seats it was contesting in southern Rakhine. But he admitted the group "was fighting hate speech promoted by people wanting to cause problems."

Suu Kyi's visit to Rakhine comes amid growing concerns about the role of religion in politics in the divided country, which has a Buddhist majority but is also wildly diverse, with 130 different ethnic groups.

Ahead of the election, the government passed controversial race and religion laws widely seen as targeting Myanmar's Muslim minority. Ma Ba Tha, the hard-line Buddhist group, had openly campaigned for the legislation, which included marriage and birth restrictions.

Suu Kyi's Rakhine campaign swing also coincided with the release of a damning report by the Association of Southeast Asian Nations Parliamentarians for Human Rights, which warned of a "looming regional crisis" in northern Rakhine.