Myanmar police escort Rohingya Muslims back to a camp in Rakhine State after they were detained at sea in this Nov. 30, 2018 file photo. Myanmar authorities say they have detained another boat carrying 173 migrants off the country’s southern coast on Dec. 15. (Photo by AFP)

Myanmar’s navy has intercepted a boat carrying nearly 200 Rohingya in the Andaman Sea, according to a senior official.

The boat was stopped about 135 miles west Kawthaung township in southern Mynanmar on Dec. 15, the official from the Myanmar military commander-in-chief’s office said.

It was found to contain 173 Rohingya migrants that included 69 women and 22 children, it said, adding the skipper and six crew were detained.

The official avoided the term ‘Rohingya’ and referred to the migrants as “illegal Bengalis’.

Chris Lewa, director of the Arakan Project, a group that works for Rohingya rights, said the migrants left Bangladesh on Dec 6.

She said more than two years after a Rohingya exodus to Bangladesh, refugees do not see any hope for their future whether in Myanmar or in Bangladesh.

More than 700,000 Rohingya fled to Bangladesh to escape a Myanmar military crackdown in Rakhine that began in August 2017.

A United Nations fact-finding mission later determined that the Myanmar military's persecution of the Rohingya amounted to genocide.

Since then there has been no improvement in northern Rakhine State, which is preventing them returning safely any time soon, Lewa said. 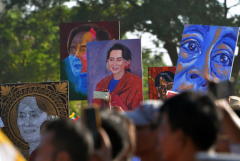 Since August this year, Bangladesh has imposed restrictions on their movement, shut down the internet, denied children education and prohibited their access to a livelihood, she added.

Thousands of Rohingya Muslims from Myanmar’s Rakhine State and Bangladesh have taken perilous boat journeys in pursuit of better opportunities in Malaysia and Thailand in recent years.

On June 11, Thai authorities discovered 65 Rohingya Muslims on an island in southern Thailand after their boat ran out of fuel.

In November 2018, at least four boats, each carrying scores of men, women and children that departed from Rakhine State for Malaysia, were intercepted by Myanmar’s navy.