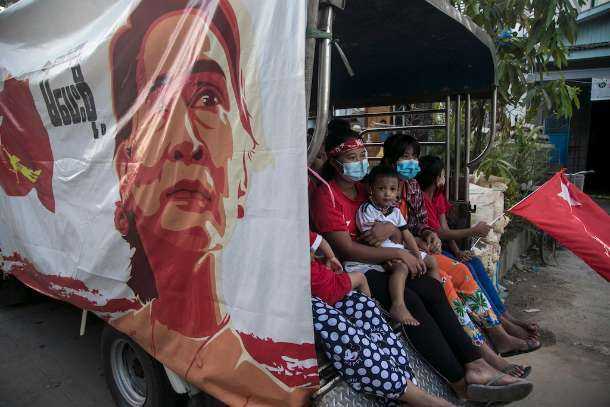 Supporters of the National League for Democracy (NLD) party sit in a truck with an image of Myanmar state counselor Aung San Suu Kyi as they celebrate election success in Yangon on Nov. 10. (Photo: AFP)

Senior officials from the USDP who were retired generals lost many seats to the ruling NLD party in the Nov. 8 polls.

As of Nov. 13, official results show the NLD has won 346 of the 412 declared seats to secure the 322 seats needed in the bicameral parliament to form a government.

There are a total of 664 seats in both houses of parliament but one quarter are reserved for the country’s military.

More seats are still being declared and officials from the election commission said the final results will be announced before Nov. 15.

The USDP, the main opposition, has won only 25 seats and conceded defeat to the NLD.

USDP officials have demanded a rerun of the polls under the management of the military as they said the election was neither free nor fair. The election commission rejected their request.

Local and international observers concluded that the election took place smoothly and peacefully.

The election was seen as a test of Myanmar’s democratic reforms as the country is in a transition to democracy after emerging from five decades of military rule.

Suu Kyi, whom most people in Myanmar call “Mother Suu”, remains popular among the country’s seven regions where the majority Bamar are based.

Rights groups said the election was flawed as millions of people were disenfranchised including Rohingya and Rakhine, and there was a lack of consultation over the cancellation of polls in the Rakhine, Kachin, Karen, Shan and Bago regions.

The Arakan Army, which is fighting for self-autonomy in Rakhine and remains in intensifying conflict with the military, has called on the government and the military to hold by-elections as soon as possible after declaring a ceasefire.

More than 92,000 people are displaced in Rakhine and over 11,000 in Chin state due to nearly two years of conflict, according to the United Nations.