Their mission, logo and plans remain the same, says monk from anti-Muslim and ultra-nationalist group 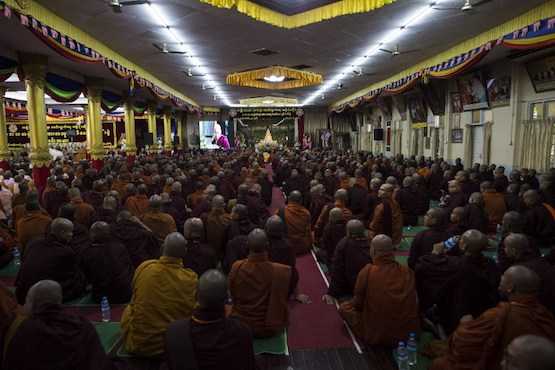 Buddhist ultra-nationalist monks from the radical Ma Ba Tha attend a meeting in Yangon on May 27 following the decision by the State Sanhga Committee to abolish their group. (Photo by Ye Aung Thu/AFP)

Myanmar's hard-line Buddhist group "Ma Ba Tha" was banned by the Buddhist State Sangha authority "Ma Ha Na" which has also ordered that the group take down all its posters and signboards across the country by July 15.

But there is little evidence to say this will be done or enforced in anyway.

Ma Ba Tha's Central Executive Committee responded to the May 25 ban by renaming themselves as the Buddha Dhamma Philanthropic Foundation.

The group is known for being ultra-nationalistic and for its extreme anti-Muslim rhetoric.

"The State Sangha's order is just on paper and it is not an effective one," Thawe Chun said. "And they can't give an order to the Ministry of Home Affairs to take action on any breach of its edicts."

Other Ma Ba Tha leaders, are defying the orders from Ma Ha Na in other ways.

Ma Ba Tha in Karen State and Mandalay Division will continue to use its old name but they will follow the guidelines of the newly named Buddha Dhamma Philanthropic Foundation. Thawe Chun said these two branches won't take down any posters or signage by July 15 and issued a challenge to anyone brave enough to do so.

Across the country, there are 185 branches of the hard-line group. Thawe Chun says it has 10 million estimated supporters.

Ma Ba Tha, spearheaded much of the anti-Muslim rhetoric which has fueled sectarian conflict in the country, particularly in western Rakhine State. Violence there in 2012 left more than 200 people dead and forced tens of thousands — mostly Rohingya Muslims — to flee their homes. Myanmar's ruling council of monks gather during the conclusion of a two-day meeting in Yangon on July 14, 2016, where the council formally distanced itself from the hard-line Ma Ba Tha group. The council then banned the group on May 25 this year. (Photo by AFP)

Observers say the group's defiance of the State Sangha's directive is a big challenge for Aung San Suu Kyi's government which is already limited in its power because the military controls three key ministries — Home Affairs, Defense and Border Affairs.

Myint Swe, chairman of Yangon-based NGO, Yadana Metta, said the government needs to have the support of the Ministry of Home Affairs in order to take a strong stance against Ma Ba Tha and enforce Ma Ha Na's order.

"We may have a new civilian government who had an election victory but we are yet to become a democratic nation," Myint Swe told ucanews.com.

He added that "religion and politics" should not be mixed but political opportunists are using religion as a tool to destabilize the country.

Nyan Win, a NLD central executive committee member, said that Ma Ba Tha must follow the order as it was issued by the highest Buddhist authority in the country.

"If Ma Ba Tha doesn't obey the order, it will be an act of opposition to the top Buddhist body," Nyan Win told ucanews.com.

Ma Ha Na's order came two weeks after dozens of hard-line Buddhist monks and supporters raided a Muslim neighborhood in Yangon. They were reportedly searching for Rohingya who they believed were hiding there illegally.

Ashin Seindita, a Pyin-Oo-Lwin-based monk and founder of the Asian Light Foundation that carries out charitable work, hailed the state-run Buddhist authority's order as an appropriate move done at the right time.

"We already have an official Buddhist body with Ma Ha Na so we don't need Ma Ba Tha. If Ma Ba Tha doesn't obey Ma Ha Na's order, it will create divisions among monks and lead to a confrontation with the top Buddhist body," Seindita told ucanews.com.

Kyaw Nyein, secretary of the Ulama Islamic Organization in Yangon, said Ma Ba Tha might not go away if the government doesn't act.

"If those hard-line Buddhists, those who ferment anti-Muslim violence remain, it is a big concern for religious minorities and for the country," Kyaw Nyein who is also a lawyer told ucanews.com. Books about Myanmar hard-line Buddhist monk Wirathu being sold in this 2016 file image at a gathering marking the third anniversary of the founding of Ma Ba Tha, a hard-line Buddhist movement at the forefront of anti-Muslim sentiment that has fomented across Myanmar in recent years. (Photo by Romeo Gacad/AFP)

U Parmaukkha, a Yangon-based nationalist monk and former member of Ma Ba Tha, said the group is necessary if they focus on protecting race and religion.

"But Ma Ba Tha must not affiliate with the country's politics," U Parmaukkha who resigned from Ma Ba Tha last year told ucanews.com.

The nationalist monk acknowledged that some monks from Ma Ba Tha had spoken out publicly on politics and lobbied for the military-backed Union Solidarity and Development Party (USDP) before the 2015 general election.

"Due to fiery speeches against Muslims by some monks and those who became involved in politics, Ma Ba Tha's image has been tarnished among the international community," said the monk.

U Parmakkha said some USDP officials indirectly provided financial help to the Ma Ba Tha before the 2015 election.

Ma Ba Tha was established in 2013 and was influential in lobbying for a raft of so-called race and religion laws that were passed by a military-backed government before the 2015 election.

Ma Ba Tha was a strong supporter of the previous military-backed regime under President Thein Sein whose political party was trounced in the 2015 elections by Suu Kyi's NLD.