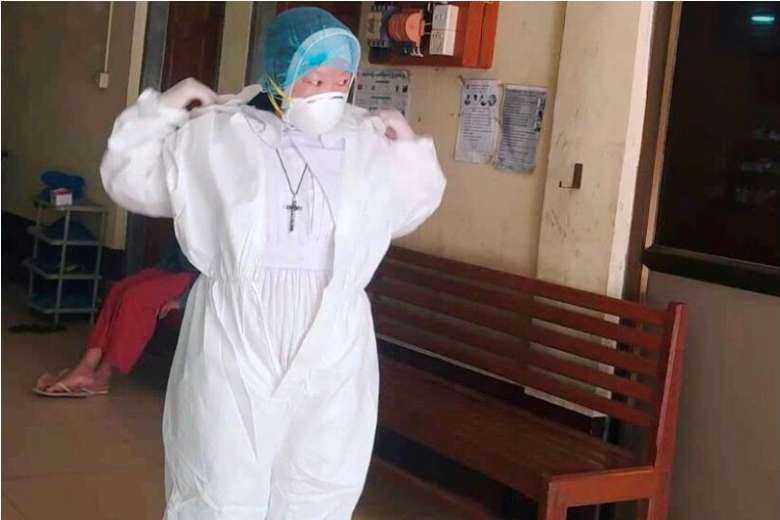 It is not unusual for Sister Ann Rose Nu Tawng from the Sisters of St. Francis Xavier congregation in Myanmar to risk her life.

“I have no fear of dying even if I may get infected with the Covid-19 virus,” the Catholic nun told UCA News in between nursing coronavirus patients at a church-run care center in Myanmar’s remote Kachin state.

In February, in an image that resonated around the world, Sister Nu Tawng was seen kneeling in front of police officers in Myitkyina, the capital city of Kachin state, trying to protect young protesters seeking refuge in the clinic she works at after the country was rocked by public unrest against the military coup. She repeated the brave act in March.

She has since shifted her focus to helping sick patients from pandemic-stricken villages that health workers cannot reach. Donning personal protective equipment (PPE), the nun is determined to give moral and medical support to victims.

From early morning until late evening, Sister Nu Tawng is preoccupied at the clinic where people with symptoms of Covid-19 rush from the nearby villages to get tested and treated.

Many rural people who have contracted the virus have no other option as state-run hospitals are turning them away due to a lack of health workers and beds.

I don’t feel tired despite being preoccupied with daily tasks. I feel this is my duty

“I can’t sit idle. I have seen the difficulties people are facing on the ground,” the nun said.

Since June, she has been regularly reaching out to Buddhist and Christian houses in nearby villages, and also health camps around Myitkyina, to help people with Covid-19 tests, oxygen support and blood pressure checks besides counseling them.

Her mobile phone keeps ringing throughout the day as people call for help. “I don’t feel tired despite being preoccupied with daily tasks. I feel this is my duty,” she said.

The only difficulty the 45-year-old Kachin nun faces is in breathing freely along with the heavy sweating caused by the PPE suit she wears for long hours.

She prefers to sleep at the clinic with the other health staff instead of returning to her community house, for the safety of the others, especially the elderly nuns staying there.

With their limited funds, the church-run centers provide medical support free of charge to all those in need.

“We don’t take any fees from those who cannot afford it,” Sister Nu Tawng said.

The nun maintained the effort was just a small act of charity and there were many people at the forefront in battling the Covid-19 crisis in the country.

“It’s just a small act of showing love and care. I believe we need to do something for the people while we are living,” she said.

The Kachin nun’s act of solidarity comes as the Southeast Asian nation is facing a worsening Covid-19 crisis followed by a political and economic crisis brought about by the Feb. 1 military coup.

Myanmar’s health system has virtually collapsed and hospitals are barely functioning as many doctors and nurses have joined the mass civil disobedience movement.

Sister Nu Tawng inspired people around the world with her fearless acts of standing between security forces and unarmed young protesters during the crackdowns in February and March.

Her courageous acts also got the attention of Pope Francis who prayed in March saying, “I, too, kneel on the streets of Myanmar and say, ‘Stop the violence.’ I, too, spread wide my arms and say, ‘Make way for dialogue.’”

For the Catholic nun, serving in Myitkyina Diocese since 2010, her role during the Covid-19 crisis is not much different from her earlier one during the political unrest.

“I could have died when I confronted the security forces and I could also die now by contracting the deadly virus,” she said.

Her message to the outside world is simple: “Please pray for my work, for the people, and continue your prayers even if I pass away.”