Minority groups, including Christians, could hold sway as campaign begins 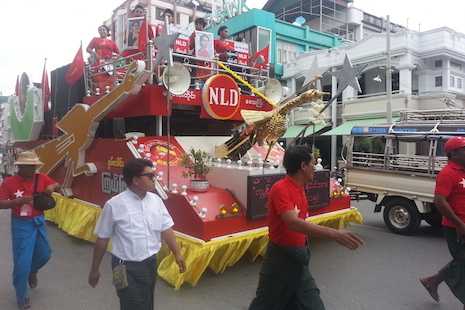 Political parties in Myanmar have launched their campaigns ahead of long-awaited national elections on Nov. 8.

Parties from the country’s ethnic-based states, many of them heavily populated by Christians, have high hopes for stronger parliamentary representation. But the official start of the campaign period, Sept. 8, also comes as many Muslim Rohingya candidates find themselves disqualified from running.

Many observers see the upcoming election as a test of the quasi-civilian government’s commitment to political reforms. For ethnic minorities in the wildly diverse country, the election could represent a major opportunity. Two-thirds of the 90 registered political parties represent minority groups from Myanmar’s seven ethnic-based states.

Opposition leader Aung San Suu Kyi’s National League for Democracy, or NLD, will contest the election after boycotting the 2010 polls, which saw the ruling military junta nominally hand over control of the country to an elected parliament — albeit one where the military still holds sway.

Many observers believe Suu Kyi’s party could win a majority of seats in November, ahead of its main rival, the military-backed Union Solidarity and Development Party.

In Myanmar’s ethnic states, however, Suu Kyi will be challenged by ethnicity aligned local parties dissatisfied with politics as usual.

"Ethnic people have low trust in her, so [the NLD] is most unlikely to take seats over ethnic parties," said Paul Hawi Ying, a Catholic Upper House lawmaker from the Chin Progressive Party, based in Christian-majority Chin state. "We have high hopes that ethnic people will vote for ethnic parties."

He said voting for local parties will give marginalized minority communities more of a say in the future of Myanmar, and bring positive development to remote Chin state, one of the most impoverished areas in the country. A woman walks past the National League for Democracy party office in Loikaw, Kayah state on Sept. 9. (Photo by Ye Aung Thu/AFP)

Myanmar’s Bamar Buddhist majority have traditionally dominated political life in the country. But as part of her campaign to win over ethnic voters, Suu Kyi will visit eastern Myanmar’s Kayah state, which has a sizable Christian population, on Sept. 10.

"Ethnic people have realized the failure of the ruling party and the silence of Suu Kyi about federalism, which ethnic groups have been longing for," he said. "So both of them are less likely to win against ethnic parties."

Khu Eugene, a Catholic and chairman of the Kayan National Party, said the goal of most minority-based parties is to attain proper representation.

"Our ultimate goal is to reach a real federalism that will have self-determination and equal rights so we hope that we would work for it by getting more seats," he said.

Some observers believe ethnicity aligned parties could play a larger role this year, particularly in choosing the country’s president after the Nov. 8 vote. Suu Kyi has been barred from the presidency because the country’s constitution prevents people whose children are foreign citizens from becoming president.

Both houses of parliament nominate a presidential candidate, who must secure the backing of a parliamentary majority. The military, which holds a reserved 25 percent of seats in parliament, will nominate a third.

If they vote as a bloc, ethnic parties could have a larger say in who becomes president.

"We expect that ethnic parties will be crucial to choosing the presidential candidate in parliament but we will wait and see how the NLD makes alliances with ethnic parties," said Paul Hawi Ying.

However, while political parties kicked off their campaigns this week, many Muslim candidates found themselves excluded from the country’s historic polls.

Of the 88 parliamentary candidates initially disqualified by the country’s election commission, at least 30 are Muslim candidates — mostly from the Muslim Rohingya minority in Rakhine state.

Kyaw Soe Aung, general secretary of the Human Rights and Democracy Party, made up predominantly of Rohingya, said 17 of its 18 candidates have been disqualified because the political hopefuls or their parents were deemed not to be citizens.

"It is clear that the move attempts to disband our Rohingya party from the election by targeting minority Muslims. So I doubt the government’s commitment to a free, fair and inclusive election," Kyaw Soe Aung told ucanews.com Sept. 7.