The Church has become a vigorous proponent for religious tolerance 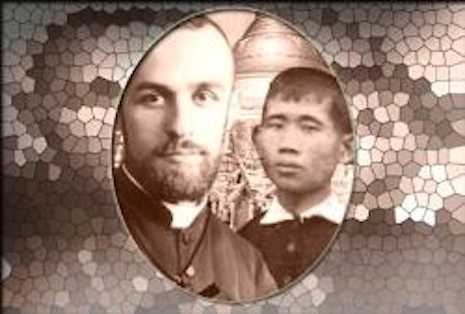 Six decades after its first saint was murdered for his faith amid a bloody civil war, Myanmar's Catholic Church is stepping up calls for peace and religious tolerance as it celebrates its 500th anniversary.

The grisly 1950 killing of Isidore Ngei Ko Lat, a religious teacher travelling with an Italian priest in the wild and war-ravaged eastern borderlands, had been almost forgotten after decades of military rule that severely restricted religious minorities in the mainly Buddhist country.

But his canonisation in May has bolstered the Catholic Church, which marked five centuries in Myanmar with celebrations that had been delayed by four years because of curbs to religious freedoms under the former junta.

"We are very encouraged because we have the saint, the first saint officially beatified from Myanmar," said Father Celso, a parish priest from the Kayah state capital Loikaw, near where Isidore and his colleague Father Mario Vergara perished.

The pair had waded into a dispute with Baptist ethnic minority rebels in a remote area where they had started an energetic drive to recruit Catholics.

Having accepted government help to travel in the region, they were seen as state allies by the insurgents, who were embarking on what was to become the world's longest-running civil war.

The missionaries were marched into the jungle and shot. Their bodies were stashed in sacks and flung into the mighty Salween river, never to be seen again.

"That time of conflict was not the time to take things slowly and build understanding," Father Celso said in the sun-drenched grounds of Loikaw's imposing cathedral.

He said the missionaries were "competing for the faith" of local people, many of whom were animists or had already converted to Baptism. But the Christian sects had since then put their differences behind them.

Since independence from Britain in 1948 there have been decades of civil strife in Myanmar's border areas. Ethnic minorities have long complained of discrimination, religious persecution and abuses by the army, which ruled with an iron fist from 1962 until 2011.

Overall, Christians are thought to make up about four percent of Myanmar's 51 million population — around 500,000 of them Catholics.

Muslims make up another four percent and Buddhists around 90 percent, with other religions including Hinduism and animism.

Rogers said that "even in the darkest times" some spoke out against injustice in subtle ways, including by weaving messages into sermons. But the relative powerlessness of the Church meant "there was an element of fear".

A quasi-civilian regime has begun opening the country to the world in the past four years, with reforms including lifting media censorship and allowing Aung San Suu Kyi and her opposition party to enter parliament.

The changes have emboldened the Church to speak out against entrenched conflict in northern Christian-majority Kachin state between the army and ethnic rebels, which has displaced around 100,000 people.

Senior figures have also decried religious intolerance and the waves of mob violence against minority Muslims that have left around 200 people dead since 2012.

"If Burma is to be truly free, peaceful and prosperous, the rights of all ethnicities and religious faiths must be protected," said Charles Bo, the Archbishop of Yangon, in a Washington Post article in June.

"A movement that has grown in volume and influence threatens this: extreme Buddhist nationalism."

The Church, which already runs aid projects across the country, has taken part in multi-faith dialogue uniting moderates from all faiths to promote tolerance.

Last month it held a lively celebration at Yangon's St Mary’s cathedral to mark 500 years of service in Myanmar.

Thousands of people, many wearing colourful traditional dress of ethnic minorities, gathered in the city for the three-day event. Many expressed delight and astonishment to see so many other believers in one place.

"It is a once-in-500-years event," said 25-year-old Bawk Ra, her shoulders draped by the shimmering silver shawl of her Kachin traditional costume.

"I am so happy to meet different people from the same religion."

Portuguese traders are thought to have brought Catholicism to Myanmar in 1510 as they tried to extend their missionary reach from their Indian settlement in Goa.

Early missionaries had to contend not only with the ferocious heat and malarial jungles that had defeated formidable armies, but also the deep reservations of local people.

A booklet published by the Loikaw church tells of the travails during the 1870s of Father Villa, shunned by the locals of Dorokhu village who did not believe he was human because the shoe-wearing priest "had no toes".

"When the long-bearded foreign missionary was seen for the first time, the villagers considered him to be an ogre and they were afraid of him," it said.

But five centuries have seen the church integrated into Myanmar, with democracy champion Suu Kyi even meeting Pope Francis at the Vatican in 2013.

"Even though they are a minority religion I think they are playing quite a key role in society." AFP