Cardinal Charles Bo of Yangon, president of the Federation of Asian Bishops' Conferences (FABC), will be among the main speakers at the International Eucharistic Congress underway in Hungary.

The Congress opened on Sept. 5 at the Heroes' Square in Budapest with a choir of 1,000 singers. The Eucharistic celebrations were led by Cardinal Angelo Bagnasco, archbishop emeritus of Genoa.

Cardinal Bo, an outspoken advocate for human rights, peace and justice in Buddhist-majority Myanmar, will lead the morning prayer, catechesis, testimonies and workshops on Sept. 8.

He is president of the Catholic Bishops’ Conference of Myanmar (CBCM) and a member of the Vatican’s Department of Communication as well as a member of the Congregation for Institutes of Consecrated Life and Societies of Apostolic Life and the Pontifical Council for Culture.

The International Eucharistic Congress is a celebration of the real presence of Jesus Christ in the Eucharist with Christians from around the world. The 52nd edition was initially planned to take place in 2020 but had to be postponed due to the coronavirus pandemic and is now being held from Sept. 5-12.

The aim of the congress is to deepen knowledge and respect for the Eucharist. Each day of the Congress includes Mass and cultural and spiritual events around the Hungarian capital.

It will feature an exhibition on the persecution of Christians around the world in cooperation with the Hungarian National Museum and Hungary Helps, the country’s humanitarian assistance program for persecuted Christians.

The congress will be officially concluded by Pope Francis with a Mass celebrated in Heroes’ Square. He will travel to Slovakia after the Mass.

“The arrival of the Holy Father will be a great sign of hope even after a year and a half of pandemic,” Cardinal Peter Ero, archbishop of Esztergom-Budapest and primate of the Catholic Church of Hungary, told Vatican News. 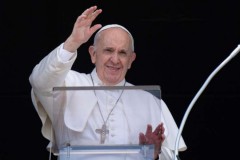 Pope Francis has asked for prayers for his pilgrimage to Budapest and three-day visit to Slovakia.