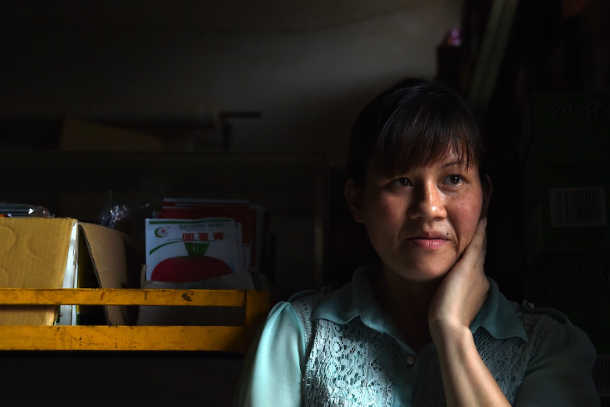 A file image of a Vietnamese bride Nguyen Thi Hang in Weijian village, in China's Henan province. Many single Chinese men are seeking to find wives in neighboring countries like Vietnam and Myanmar and are willing to pay high prices to get them. (Photo by Greg Baker/AFP)

Thousands of impoverished ethnic minority women in Myanmar's war-torn Kachin and Shan states have been forced into marriages in neighboring China, say the authors of a new study published by Johns Hopkins University in the United States.

Thousands more disadvantaged women in the country's mountainous northernmost rural hinterland remain at risk of being trafficked across the border to marry local Chinese men against their will and bear children for them, the experts warn.

For the study, which is the most comprehensive research of its kind to date, experts from the American university teamed up with the Kachin Women's Association Thailand, a rights group, to conduct surveys in 40 communities around three adjacent administrative areas: Kachin State and northern Shan State as well as Yunnan province in China.

All told, researchers say, about 7,500 ethnic minority women in economically disadvantaged communities have in recent years been lured by human traffickers into forced marriages in China on false promises. Three-quarters of the women were found to have borne children in these unions.

"These women are usually undocumented, members of minorities, poor and undereducated, and don't know how to get legal redress [after being trafficked]. This is known to traffickers who exploit it," says W. Courtland Robinson, an associate professor at Johns Hopkins University's Bloomberg School of Public Health who was the study's lead author.

Human traffickers often lure Kachin and other ethnic minority women, especially younger ones, into China by promising them well-paying employment opportunities. Traffickers target disadvantaged women in poor rural communities indiscriminately regardless of their religion or ethnicity.

"Some [older] women came to me, wanting to find out what happened to their [teenage] daughters," recalls Shirley Seng, a prominent ethnic Kachin women's rights advocate who lives in Thailand. "We found out that many of these young women had been lured to China under the ruse of being given jobs."

Usually, the women are then coerced or cajoled into bearing children for their husbands. Although some trafficked women are now happy in their marriage, most have come to resent their new husbands, says Moon Nay Li, general secretary of the Kachin Women's Association Thailand.

Many of the trafficked women would love to return to Myanmar but often lack the means to do so. Their husbands might also keep them under close watch or brutalize them if they tried to flee.

"There is a [Kachin] woman who was trafficked to China three times and had to give birth each time," Moon Nay Li says. "Trafficked women often face terrible abuse."

China's one-child policy, which was launched in 1980 to keep the country's population size under control, has led to a severe gender imbalance in the communist nation with 118 boys born for every 100 girls. Many Chinese parents, allowed to have only one child, prefer to keep boys and abort girls.

As a result, many single Chinese men are seeking to find wives in neighboring countries like Myanmar and are willing to pay high prices to get them. "It's a case of push and pull," Robertson says. "The push is poverty in Burma, the pull is gender imbalance in China."

Some cultural practices and old traditions in Myanmar have aided in the trafficking and ill-treatment of vulnerable women. In impoverished rural communities, girls and young women may sometimes be viewed essentially as commodities by their parents who may be willing to sell their daughters to men offering an adequate "bride price."

"I don't love my old husband at all," a 29-year-old ethnic minority woman who was forced by her parents into a marriage in China told the researchers. "I married him even though I did not want to because we already had his money, so I didn't have a choice. I had to listen to my parents."

Meanwhile, the traditional practice of arranged marriages can also act as a hindrance by inuring some local women to the injustice of being forced to marry men they would never marry of their own volition.

"There are many concerns about matters of consent [from the women] while cultural practices and social mores also play a role," Robinson acknowledges.

Yet despite the extent of the problem, law enforcement efforts, on both sides of the border between Myanmar and China, have been largely wanting. "There is no security for these women and the challenges are enormous," Moon Nay Li notes.

Troublingly, she adds, government officials often do not appear to view minority women as "deserving of equal rights and equal dignity."

Exacerbating endemic poverty has been perpetual violence in Kachin State, where separatists have been seeking to free themselves from Burmese rule. High levels of drug use, especially of locally grown opium, have also had an adverse impact on local economic and social conditions.

"The area isn't peaceful and there is an economic crisis," Seng says. "This makes many local women especially vulnerable to all sorts of injustice."