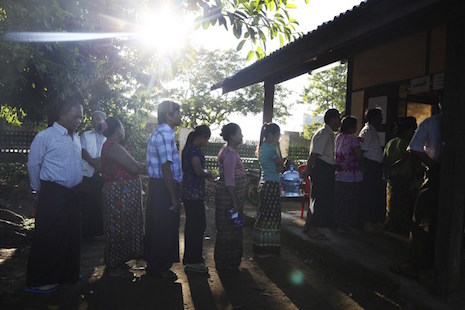 Voters queue to cast their vote at a polling station in Sittwe, in Myanmar's Rakhine state, on Nov. 8. (Photo by Myat Thu/AFP)

A hard-line Buddhist party is emerging as a key force in Myanmar's religiously divided Rakhine state after the Nov. 8 elections, sparking concern that ethnic tensions will boil over with Rohingya Muslims bearing the brunt.

The Arakan National Party, which represents Rakhine state's ethnic majority, claims it has won at least 21 of 29 available seats allotted for Rakhine in the national parliament, as well as 22 in state parliament, following Myanmar's Nov. 8 elections.

So far, the country's election commission has only issued partial results confirming that the party won five total seats, with further results expected in waves in the coming days.

However, the party's apparent success has raised concerns among Rohingya Muslims, a minority group that has frequently found themselves in the middle of conflicts with the ethnic Rakhine majority.

Kyaw Hla Aung, a former NGO worker in Thetkaepyin, a camp for displaced Rohingya near the state capital Sittwe, said many Rohingya are hopeful that what is likely a nationwide landslide victory for opposition leader Aung San Suu Kyi will bode well for the minority group.

"But we have concerns about the (Arakan National Party) gaining seats in state parliament, as more oppression could happen because of rising nationalism," Kyaw Hla Aung said in an interview Nov. 12.

Daw Cho Cho, who lives in a displacement camp in Myaebon township, echoed these concerns.

"We are very worried that the (Arakan National Party) has pushed to deport Rohingya Muslims to other countries," she said.

The Arakan National Party pushed Myanmar's federal government to strip voting rights from almost 1 million Rohingya in the state before the November elections.

Rohingya are regarded by many Rakhine and others as being "Bengali" — implying they are illegal immigrants from neighboring Bangladesh — even though many have lived in Myanmar for generations. The uncomfortable truth about Myanmar While temporary "white card" identity documents had allowed Rohingya to vote in previous polls, the government revoked these documents earlier this year, effectively disenfranchising hundreds of thousands of Rohingya.

Despite the controversies, however, parliamentarians with the Arakan National Party are playing down the party's nationalistic tone. Pe Than, a sitting lower house parliamentarian who was re-elected Nov. 8, said any new government in the state will act according to the law.

"At present, both communities can't stay together," he said. "So the international community shouldn't push for keeping both communities together and instead they should support the development of the people." In the Nov. 8 polls, Suu Kyi's National League for Democracy surged to a landslide victory, taking as many as 80 percent of contested seats, with final results still coming in seat by seat. President Thein Sein and Min Aung Hlaing, the military chief, congratulated Suu Kyi and agreed to meet for reconciliation talks after the election results are officially announced.

Suu Kyi's party appears to have won a handful of seats in Rakhine. But her National League for Democracy has not yet revealed how it will tackle the problems of apartheid-like segregation in refugee camps, where malnutrition and disease are rife.

"It's too early to talk about the policy of solving Muslim issues in Rakhine," said Win Htein, an executive committee member with Suu Kyi's party and also an aide to the opposition leader.

Win Naing, a party member who won a state parliament seat in Rakhine's Thandwe, said this is a delicate issue.

"I think we need to prioritize the rule of law so that we can move forward in solving the other issues one after another," Win Naing said.

Persecution in the state has led to an exodus of Rohingya, who often risk a perilous boat journey to other countries in the region.