Injured people from Kyauk Tan village in Rathedaung township are carried on stretchers as they arrive in Rakhine State's capital Sittwe on May 2 after the army opened fire on a group of ethnic Rakhine detainees at a school in the village. Myanmar's army said it shot dead six detainees while holding 275 men on suspicion of being Rakhine rebels. (AFP photo)

Six ethnic Rakhine were killed and eight injured, three seriously, on May 2 in a school compound in Kyauk Tan village in Rathedaung township where more than 275 people were detained, according to media reports. The detained were being questioned for links to the Arakan Army.

An AFP report cited military spokesman Zaw Min Tun as saying that “shots were fired in the school early Thursday morning when the detainees tried to attack security forces who had no option but to shoot.”

Robertson said HRW has consistently documented Myanmar troops using torture while interrogating persons suspected to be members of insurgent groups, so there is every reason to believe those rounded up and held at the school were tortured. 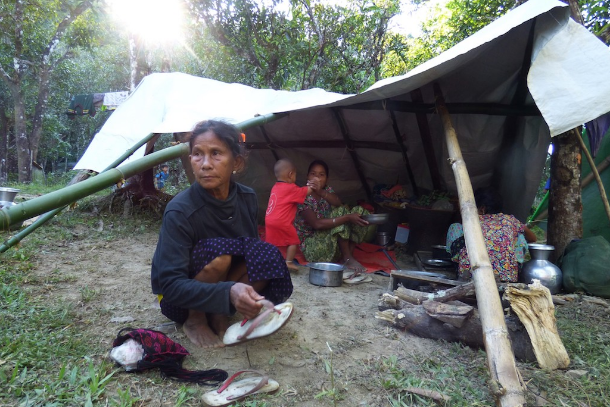 “The big question is how did some of them end up dead, and whether soldiers committed extrajudicial executions — as the Tatmadaw has frequently done before,” Robertson told ucanews.com.

He said Myanmar should also permit international human rights monitors “to investigate these incidents, speak to villagers confidentially and away from the troops, and publicly report on what they find.”

Stephan Sakalian, head of delegation in Myanmar for the International Committee of the Red Cross (ICRC), said Red Cross teams responded quickly to assist victims of the school shootings.

“The ICRC is concerned about increasing numbers of civilian casualties during recent weeks and urges all parties to the conflict to protect the civilian population in line with international humanitarian law,” he said on May 2.

The latest civilian killings come after three ethnic Rakhine died in military custody in April and their bodies were cremated before families could see them.

On May 2, the Arakan National Party sent a written appeal to President Win Myint, State Counselor Aung San Suu Kyi, military commander-in-chief Min Aung Hlaing and the Myanmar Human Rights Commission asking for action against soldiers in the latest incident and to end attacks in Rakhine.

More than 30,000 civilians have been displaced by fighting that has occurred near several townships in Rakhine, according to the United Nations.

The United Nations Human Rights Office has warned that military attacks directed at civilians in Rakhine “could be considered crimes of war.”